The U.S. and China have agreed on a “Phase One” deal and averted U.S. penalty tariffs due to take effect on December 15.

China has agreed to buy $32 billion in additional agricultural goods over the next two years from a baseline of $24 billion purchased in 2017. China will also increase its purchase of manufactured goods and energy products.

While the U.S. has agreed not to invoke the December 15 penalty tariffs, President Donald Trump said it would leave 25 percent tariffs on $250 billion of imports and cut tariffs on another $120 billion to 7.5 percent. 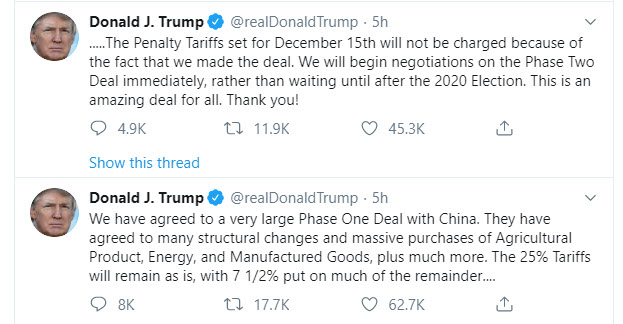 Meanwhile China says the world's two largest economies must deal with bilateral economic and trade relations with the big picture in mind. A report in China Daily says: “Implementation of the agreement will help enhance intellectual property rights protection, improve the business environment, expand market access, better safeguard the legitimate rights and interests of all companies including foreign firms in China, and protect the legitimate rights and interests of Chinese firms in their economic and trade activities with the United States.”

The U.S.-China trade war has impacted the American natural gas and oil industry through U.S. tariffs on imports of industrial components from China as well as Chinese retaliation on U.S. energy exports.

“Although we are awaiting further details, we are encouraged by the progress made between the U.S. and China,” said Dr. Aaron Padilla, API senior advisor for international policy at the American Petroleum Institute (API). “The trade war has dragged on for far too long, limiting America’s energy potential and hurting U.S. consumers, farmers and manufacturers. De-escalation is a positive step forward, but we urge both countries to continue working toward a final agreement that completely lifts tariffs on both sides and fully restores U.S. energy export growth opportunities in China, one of our most important global export markets.”

Padilla says te U.S. and China are a natural marketplace match when it comes to energy trade, with the growing U.S. natural gas and oil export capacity able to meet growing energy demand from China. However, since the beginning of the trade war in July of 2018, exports of U.S. natural gas, oil, and refined products to China began to rapidly decline due to retaliatory tariffs.

U.S. West Coast port authorities have called repeatedly for an end to the trade war.

“We’re hopeful that this is the beginning of the end to damaging trade restrictions,” said Port of Oakland Executive Director Danny Wan.  “It’s a good sign for our shipping customers, but let’s see how it plays out. There’ll be more work ahead to get global trade flowing freely again.”

The port is considered one of the principal gateways to Asia for U.S. agricultural goods. It reported record cargo volume in 2018, despite tariffs imposed by both China and the U.S. However, its total cargo volume through the first 11 months of 2019 is down 0.8 percent.

The National Retail Federation (NRF) has also welcomed the news. “For the first time in months, the United States and China are moving in the right direction on tariffs, and we congratulate negotiators from both sides for the progress they have made,” NRF Senior Vice President for Government Relations David French said. “Tariffs create uncertainty and costs for American retail supply chains, and the trade war won’t be over until they are eliminated completely. We agree that we need to realign our relationship with China, but tariffs that harm American businesses, workers and consumers are not the answer and cannot be allowed to continue.”