The U.S. Navy recently tested its longest-serving unmanned vessel as a platform for port security missions in Norfolk, Virginia, the home of its biggest base complex.

The Common Unmanned Surface Vehicle (CUSV), built by the defense conglomerate Textron, is a 40-foot remotely-operated launch with long endurance and range. CUSV was designed in the 2000s as a component of the Littoral Combat Ship (LCS) mine countermeasures "mission package." It has large towing and payload capacities for minesweeping and mine neutralization systems, and it was designed to be modular and adaptable for a variety of other tasks.

In early 2018, Textron and the Navy entered an agreement to test anti-surface weapons on the CUSV platform, including target designators, sensors and remote weapons stations - equipment suitable for patrol and force protection missions. The end product was visible in Norfolk's Elizabeth River during anti-terrorism exercise Solid Curtain 2020 earlier this month (below). 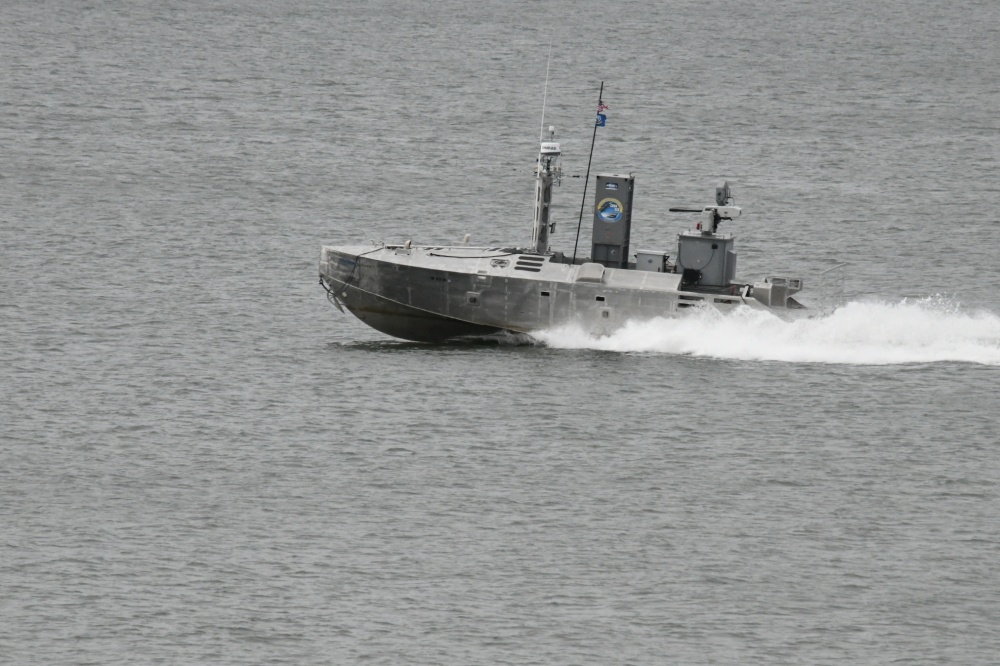 "It will go out there and be one of the tools as a harbor security boat. It may be able to have longer on-station time, may be able to operate in environments where a manned vehicle cannot . . . without putting itself at undue risk," said Captain Monty Ashliman, director of operations for Navy Region Mid-Atlantic, in comments to local media.

The CUSV test during Solid Curtain aimed to evaluate the platform's suitability for defending moored warships - in this case, the destroyer USS Arleigh Burke and the carrier USS John C. Stennis. The boat was fitted with a remotely-operated .50 caliber machine gun station with cameras, sensors and a data link to a control station on shore. During the exercise, it intercepted a suspect boat (a manned Navy launch) and hailed it, then fired simulated shots to "disable" it.

Ashliman told the local Daily Press that CUSV is "extremely close" to readiness for a patrol mission role. Unmanned patrol boats - while a small component of the surface fleet - would fit well with the Navy's broader interest in deploying autonomous and unmanned vessels.