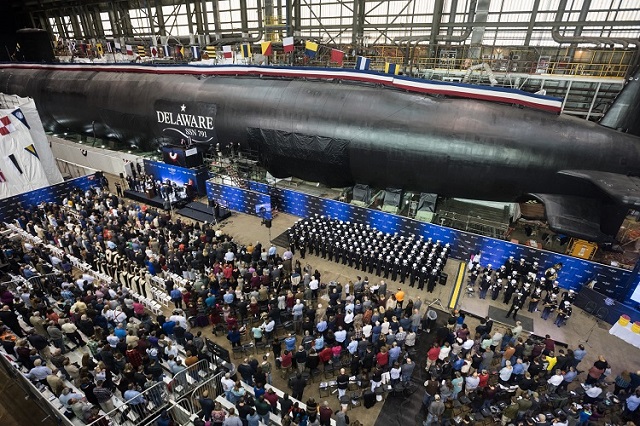 The future USS Delaware was christened at Newport News Shipbuilding, a division of Huntington Ingalls Industries, in Newport News, Virginia. The submarine is the 18th Virginia-class attack submarine and the eighth and final Virginia-class Block III submarine. The ship’s construction began in September 2013, and she is expected to be delivered in 2019.

The submarine is the seventh ship to bear the name of “The First State.” The first Delaware served in the American Revolution, the second in the Quasi War with France. The third was burned to prevent her from falling into the hands of the Confederate Navy. The fourth served blockading duties through the end of the Civil War. Little is known about the fifth, other than she was a screw steamer that began life with another name before being renamed Delaware on May 15, 1869. The sixth Delaware was a battleship commissioned Apr. 4, 1910, that served in the Atlantic and Caribbean. During World War I, she provided convoy escort and participated in allied naval exercises. She was decommissioned Nov. 10, 1923. 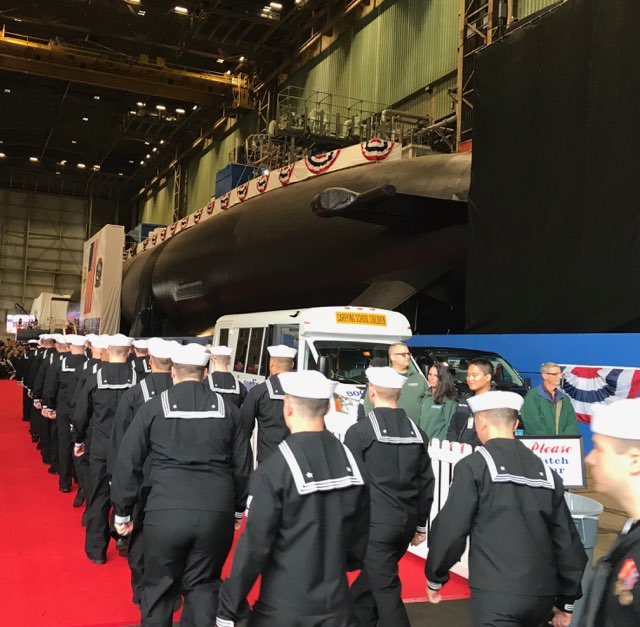 The U.S. Navy also christened the future USS Vermont at General Dynamics Electric Boat in Groton, Connecticut. She is the 19th Virginia-class attack submarine and the first of 10 Virginia-class Block IV submarines. The ship’s construction began in May 2014, and she is expected to be delivered in the fall of 2019.

The future USS Vermont, designated SSN 792, is the third U.S. Navy ship to bear the name of the “Green Mountain State.” The first Vermont was one of nine 74-gun warships authorized by Congress in 1816. The ship spent her early life laid up, but was put into service as a store and receiving ship during the Civil War. She continued in that service until struck from the Navy list in 1901. The second Vermont (Battleship No. 20) was laid down in May 1904 and commissioned March 4, 1907. She was a member of The Great White Fleet that conducted a world cruise during the Presidency of Theodore Roosevelt. Later she participated in the American occupation of Vera Cruz, Mexico. During World War I, she served as an engineering training ship before being converted to carry out her final missions as a troop transport, returning about 5,000 World War I U.S. service members from Europe. She was decommissioned June 30, 1920.