US Conducts Maritime Security Exercise in Gulf of Guinea with Allies

As part of its effort to demonstrate its commitment to maritime security in the Gulf of Guinea, U.S. forces conducted a series of exercises and a planning conference in the region. The efforts were in support of the global initiative and the programs being developed by the Nigerian government to combat the rise in assaults and hijackings of merchant ships in the region.

“The exercises we conducted this week show our commitment to the mutual goal of countering maritime crimes in the Gulf of Guinea, and how we can work together to achieve it,” said Capt. Chad Graham, commanding officer, USS Hershel “Woody” Williams. “These maritime training operations required the collaboration of not one, but three countries’ navies, all working together simultaneously,” said. “Collaborative operations like this offer invaluable experience for my crew in the present, but they also allow us to be more efficient and capable in future operations with our partners in the region.” 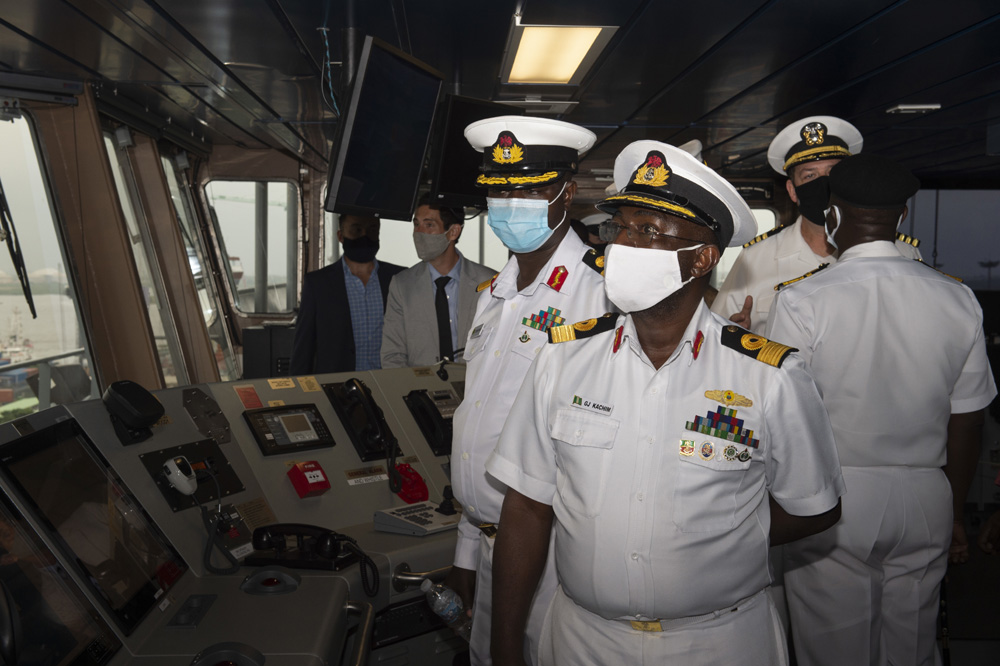 Officers of the Nigerian Navy touring the Williams (US Navy photo)

This exercise followed a two-day maritime planning event held with leaders from the Nigerian Navy. Also, during the port visit in Logos, the crew of the Williams participated in a series of community relations activities, and the vessel hosted ship tours. 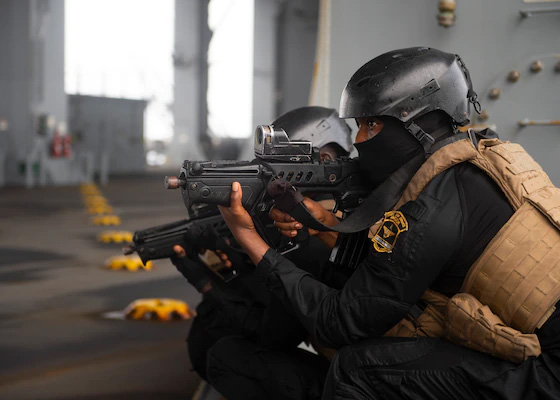 The program including a 3-day training exercise (U.S. Navy photo)

U.S. commanders noted that America shares a common interest with its African partner nations in ensuring security, safety, and freedom of navigation on the waters surrounding the continent. They noted that these waters are critical for Africa’s prosperity and access to global markets while recognizing that Gulf of Guinea nations have steadily increased their capability of working together and sharing information.

Nigeria maintains the largest navy in the Gulf of Guinea region. Recently, the government has initiated a concerted effort to increase security in the region. In July, Nigeria launched the “Deep Blue Project,” which is the first integrated maritime security strategy in West and Central Africa aimed at the ongoing threats of piracy and robbery. Nigeria is committing $195 million worth of new equipment along with a dedicated maritime security unit and training as part of the combined effort on land and at sea.

The U.S. joins with other members of the international community in an increased emphasis in providing greater maritime safety in the region. The Danish government announced plans to deploy a frigate to the area in the winter of 2021-2022 during the time when piracy activity typically increases. Denmark also called on other nations to join in deploying forces to the Gulf of Guinea.

The Williams is under the command of the U.S. Sixth Fleet, headquartered in Naples, Italy. As part of the ESB ship class, the U.S. Navy noted that she is a highly flexible platform that may be used across a broad range of military operations. Acting as a mobile sea base, the Williams is part of the critical access infrastructure that supports the deployment of forces and supplies to support missions.