In the latest example of an ocean carrier seeking to expand its business to realize opportunities in the emerging offshore wind industry, Taiwanese carrier U-Ming announced a new marine offshore joint venture. With a fleet of approximately 60 bulk carriers, U-Ming formed a partnership with World Marine Offshore to pursue the offshore wind sector in Taiwan.

U-Ming announced that its new joint venture, U-Ming Marine Offshore Company, has signed a contract for two personnel CTV vessels. They are to be built at an unspecified shipyard for delivery in the second quarter of 2022. The company also expects to purchase two similar CTVs in the fourth quarter of this year. They are expected to join the operation after completing the reflagging process.

Taiwan recently increased its goals for further expansion of its offshore wind sector. Officials announced this spring that work was underway on the third phase of auctions for leases which will start bidding in 2022. They also raised their targets to install 1.5 GW of wind power annually from 2026 to 2035.  They are expecting to add 9 GW by 2031 and a further 6 GW by 2035 for a total of more than 20 GW. The government has an objective of generating 20 percent of its electricity from renewables by 2025 while fostering the emergence of a local wind power industry. Their efforts have drawn the attention of some of the leaders in the industry, with for example Total announcing in April 2021 that it acquired a share of a new wind farm under development offshore southwest of Taipei. 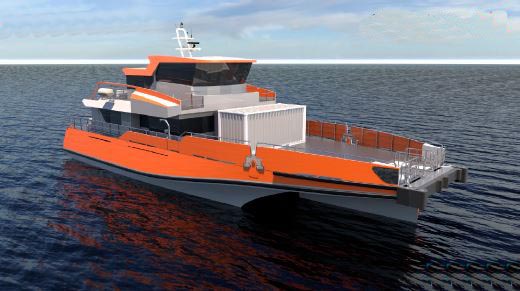 U-Ming announced that it has already signed a charter to service the offshore wind farms. Its vessels will be high-speed trimaran SWATH designs that are well suited for the harsh environment offshore in Taiwan. The new vessels will be fitted with a patented hydraulic fender system that will permit them to approach installations in high seas. They will also be fitted with a digitization and monitoring system that will report on elements such as fuel consumption, weather observations, as well as the operations of the vessels.

U-Ming’s partner for the new joint venture, World Marine Offshore, operates a fleet of 11 offshore vessels. In 2019, they began expansion into Taiwan and have contracts with Boskalis, Hitachi, Siemens Gamesa, and Vestas Offshore.