An international investigation has resulted in the largest ever seizure of heroin in the U.K. 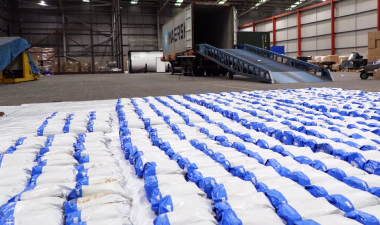 Nearly 1.3 tons of the drug were recovered from Maersk's Gibraltar container ship after she docked at the port of Felixstowe on August 30. U.K. National Crime Agency intelligence had ascertained that the heroin would be on the vessel when it docked en route to Antwerp.

The record haul, involving one kilogram blocks hidden among towels and bathrobes, would be worth around £27 million ($33 million) to organized criminals at wholesale, and in excess of £120 million ($147 million) at street level.

After officers removed the drugs, they returned the container to the vessel, which continued on to Antwerp and docked in the Belgian port city on September 1. Under surveillance by Dutch and Belgian law enforcement agencies, the container was driven by lorry to a warehouse in Rotterdam, where four people were subsequently arrested.

The 1.3 tonne haul follows the seizure of 398 kilograms of heroin from a vessel at Felixstowe port on August 2. In this case, NCA intelligence had identified a container vessel suspected of carrying a large drug shipment en route to Antwerp. As in the subsequent case, the heroin was concealed within a cover load of towels and bathrobes. The heroin was removed and the container returned to the vessel, which carried on to the port of Antwerp. Two people were subsequently arrested.

After several years of construction at CSSC's Tianjin Xingang shipyard in northern China, the hospital ship Global Mercy - the largest civilian vessel of her kind ever built - has completed her official sea trials. After some final fitting out, the shipyard will present the ship for delivery this summer.  When delivered, she will sail to Antwerp and Rotterdam for crewing and outfitting, then to Senegal for her first mission.  “These deep-water trials represent a critical checklist for our new...

The weather software and decision support company StormGeo announced Monday that it will be acquired by Alfa Laval, a leading supplier of fluid handling and purification systems. Alfa Laval plans to purchase StormGeo in order to accelerate their digital services product line and add a new way to help clients along the route to decarbonization.  StormGeo provides weather services like digital weather displays, custom forecasting and weather routing to 2,200 customers around the world in a wide variety of industries,...

In a statement Monday, U.S. President Joe Biden said that there is no evidence that the cyberattack on the U.S. East Coast's primary fuel pipeline was attributable to the Russian government. However, "there's evidence that the actors' ransomware is in Russia," he said, adding that the Kremlin has "some responsibility to deal with this." Biden is planning a meeting with Russian President Vladimir Putin to discuss the attack.  On Friday, operator Colonial Pipeline acknowledged that a cyberattack had forced it...

With increasing focus on hydrogen as one of the leading alternative fuels for the future, one of the challenges that remains is transporting the gas in large commercial volumes. Japan’s Kawasaki Heavy Industries continues to take a leadership role and recently was awarded an Approval in Principle (AiP) from ClassNK for a cargo containment system for a large liquefied hydrogen carrier. Kawasaki reports that the cargo containment system, which was developed as part of a project funded by Japan’s New...