The Cruise Lines International Association anticipates positive year-over-year growth for the industry globally in 2018, with a passenger forecast of 28 million. The U.S. and Canada saw impressive growth in 2017 with a five percent increase over the previous year, and North America represented the largest ocean passenger volume in 2017 (49 percent) with a total of more than 13 million ocean cruise passengers.

As the cruise industry continues to expand globally, plans for four new terminals in the U.S. have been advanced over the last two weeks.

The Board of Trustees of the Galveston Wharves has entered into a MOU with Royal Caribbean Cruises for the development and operation of a new cruise terminal. The long-term lease negotiations could lead to a 60-year transaction: a 20-year initial term and four 10-year options.

While specific designs and costs have not yet been announced, some details have been revealed. The new terminal will cover approximately 200,000 square feet on 10 acres of land in the southeast section of the Port known as Pier 10. Improvements to the pier bulkhead and apron will be made to safely accommodate the cruise line’s largest vessels. In addition, a staging and loading area, bus and taxi staging areas and substantial parking will be constructed. The new facility is anticipated to open in 2021.

“Over the last 15 years, Royal Caribbean has brought over 2.4 million guests to Galveston driving an economic impact of $65 million each year. The development of a new terminal is crucial to our continued growth and expansion of the brand in the region,” said Michael Bayley, President and CEO, Royal Caribbean International. Royal Caribbean currently has two ships that sail out of Galveston, Liberty of the Seas, the largest cruise ship to sail from Texas, and Vision of the Seas. The Port expects the new cruise terminal to generate an additional 1.0 million passengers halfway through the term of the contract. 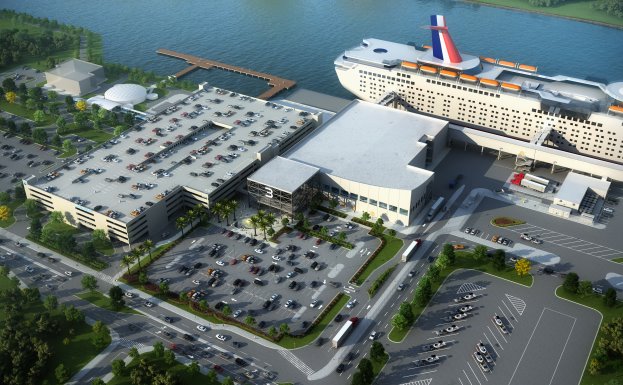 The Canaveral Port Authority (CPA) Board of Commissioners have approved a resolution for the issuance of a series of bonds up to $117 million to provide the financing for Port Canaveral’s Cruise Terminal 3 project. The new terminal will be the homeport for Carnival Cruise Line’s newest and largest cruise ship.

The Canaveral Port Authority and Carnival Cruise Line will invest in building and equipping a new two-story 185,000-square foot terminal to accommodate the as-yet-unnamed 180,000-ton Carnival Cruise Line ship that will have maximum capacity of approximately 6,500 guests.

The new cruise passenger terminal, plus an adjacent elevated parking facility to accommodate nearly 1,800 vehicles, and related wharf, road and access improvements will total $150 million – estimated to be the largest single project in the history of the Port. Carnival will contribute up to $50 million towards the cruise terminal construction project. The new terminal is slated for completion by mid-2020.

The new Carnival operating agreement, which began September 1, 2018 provides a 25-year primary term with four additional five-year renewal options and includes annual guarantees throughout. The arrival of the new Carnival ship in 2020 will mark 30 years that Carnival Cruise Line has been sailing from Port Canaveral, the longest of any of the Port’s cruise partners. 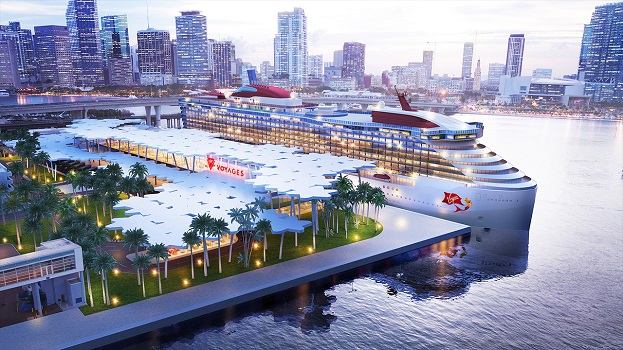 The passenger terminal's design is inspired by the form of the royal palm tree, and it was created by Miami-based architecture firm Arquitectonica. The two-story terminal’s rooftop is designed to resemble a palm tree grove, with pockets that allow natural light to flow into the building by day. It will have spotlight beams to light up the Virgin Voyages logo and the Miami sky at night. Arquitectonica's co-founder, Bernardo Fort Brescia, told the Miami Herald that “it’s more like a stage set than a cruise terminal," designed for a serene vacation experience from the moment of arrival.