2017 saw a significant recovery in upstream final investment decisions (FIDs). The number of project sanctions more than doubled compared to 2016, and Wood Mackenzie expects a similar total this year - around 30 major project FIDs. 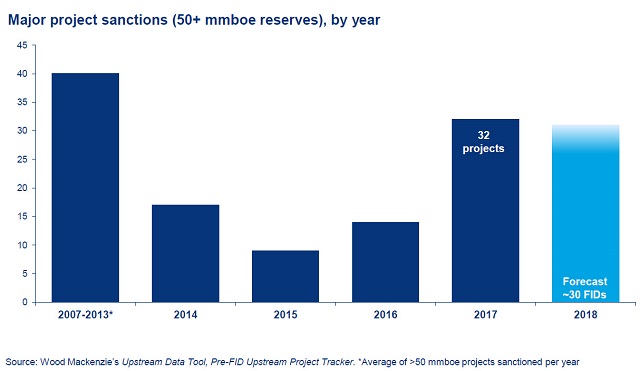 Cost reduction efforts by the industry have largely been successful. The primary focus has been to reduce project footprints through fewer wells, smaller facilities and the greater use of subsea tie-backs and existing infrastructure. Lower costs, lower breakevens, higher prices and improved corporate finances all contributed to an upgrade in industry sentiment and more projects getting sanctioned in 2017.

However the projects that did get the greenlight are notably smaller. The average capital expenditure to develop major projects (commercial reserves over 50 mmboe) sanctioned in 2017 fell to only $2.7 billion, the lowest in a decade. To put this into context, the average project capex for those sanctioned over the last decade was $5.5 billion.

"We are seeing significantly smaller projects, alongside a greater appetite for brownfield and expansion projects, and more subsea tie-backs," said Jessica Brewer, a principal analyst at Wood Mackenzie.

"Brownfield developments are popular in the current capital-constrained environment, with less spend and execution risk than a greenfield project and a faster route to first production," added Brewer. "Both investors and operators want to see faster cycle times and quicker returns on upstream projects."

The 30 projects expected to reach FID this year follow many of the trends that emerged in 2017. Average capex continues to fall – averaging only $2.2 billion – while capex/boe is now only $4.9/boe, versus $11.3/boe back in 2011. Wood Mackenzie also forecasts a 15 percent decline in average breakeven cost to $44/boe (applying a 15% discount rate), with the most competitive projects in shallow-water Norway, the U.K. and Mexico. Gas projects will be prominent, aided by big expansion projects in Norway, Iran and Oman. 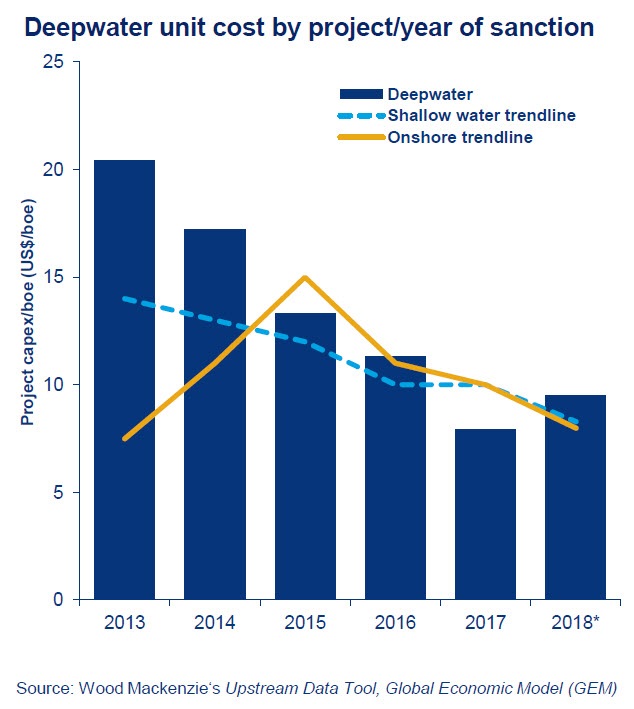 The first quarter of 2018 ended with six projects already sanctioned, including fields in the UK, Norway, Israel, the Netherlands, Malaysia and China.

"While it is good news that operators have found ways to grow in tough business conditions, the big question is whether the industry is actually spending enough," said Angus Rodger, research director, Wood Mackenzie. "We cannot rely on smaller projects forever, and when we look at LNG in particular, we see a lot of big projects on the horizon."

The FID story could shift again in 2019, with multi-billion boe developments such as Mozambique LNG, Canada LNG and expansions in Qatar and Papua New Guinea all eyeing final investment decisions.

"Can the industry apply the leaner lessons it has learnt through the downturn to these giant projects, or will we return to the boom and bust cost cycles of the past?" asks Rodger. "Companies know they don't want to be all rushing through that door at the same time and then see costs blow-out. So it will be interesting to see if any of these LNG projects push for a late-2018 sanction, thereby locking-in lower costs and pipping the competition."