Texas’ seaports are keeping a wary eye on Hurricane Harvey, which is expected to make landfall between Corpus Christi and Port O'Connor on Friday. The storm strengthened rapidly on Wednesday and Thursday, prompting the National Weather Service to issue a hurricane warning for the area between Port Mansfield to Matagorda. The current forecast predicts winds exceeding 100 knots on Friday, which would make Harvey a Category 3 hurricane – the first to make landfall in America since Hurricane Wilma in 2005.

The storm is expected to move slowly after it reaches land, pouring down dozens of inches of rain and creating a life-threatening risk of flooding. In addition, storm surge could reach as much as 6-12 feet above the high tide line along the coast between Corpus Christi and Sargent, Texas, a small town 45 nm southwest of Galveston. The National Weather Service warned that the surge would depend on the tidal cycle and on local factors, and may vary greatly by location. Greg Abbott, the governor of Texas, has preemptively declared a state of disaster in 30 counties in the hurricane's path, and seven coastal counties have issued mandatory evacuation orders. 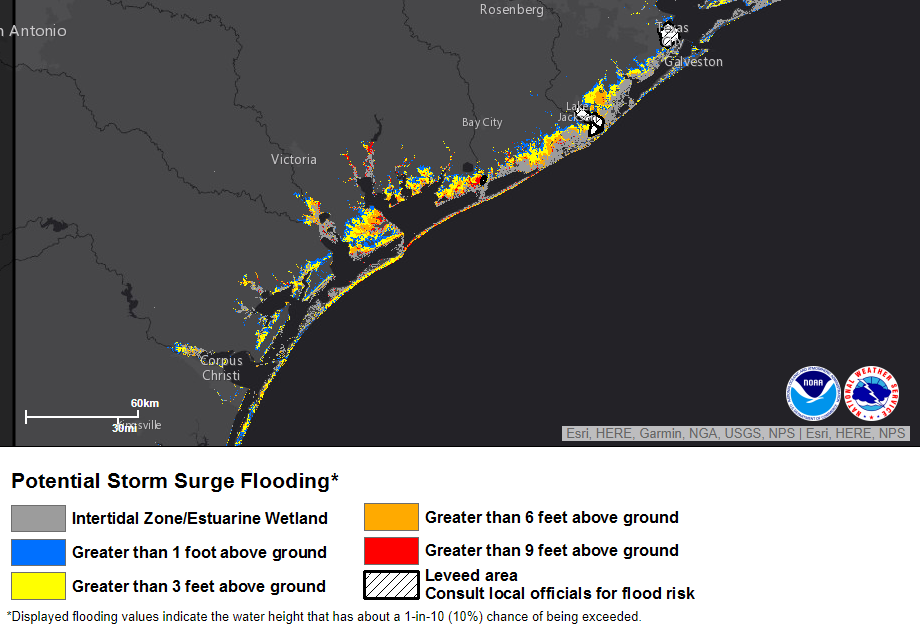 Port of Galveston has closed to marine traffic and to commercial activity. The port has called for vessel operators to prepare for the storm's impact by doubling up mooring lines and ensuring that cargo is securely lashed down. Galveston is a major home port for cruises, and the port said that Royal Caribbean has not yet made any alterations to planned itineraries. Separately, Carnival said in an update that it has no changes planned at Galveston and is monitoring the situation.

Texas A&M University at Galveston, the maritime college located across the channel from Port of Galveston, announced that it will keep its campus open for business until 1800 hours Friday. However, it has suspended all of its fall semester orientation and move-in activities for graduate and undergraduate students, which would have begun the end of this week. It is evacuating students who are already on campus to Texas A&M University at College Station, and has asked them to prepare for a five-day stay.

Port Corpus Christi said in a statement that its personnel are focused on preparing for the storm and that ordinary maintenance work has been suspended, in accordance with the port's hurricane plan. "The Port is taking this storm very seriously and it is in full-preparedness mode anticipating Harvey’s landfall, and will continue monitoring its strength and path as it gets closer to the Texas Gulf Coast,” said John LaRue, Executive Director.

The Coast Guard has set port condition yankee for all of Sector Houston-Galveston, implementing several limits on commercial operations:

In addition, Sector Houston-Galveston has issued a bulletin calling on boaters to make certain that their watercraft are properly secured.

As of Thursday, offshore oil and gas operators had evacuated 39 platforms in anticipation of the storm’s arrival. Offshore wells making up about 10 percent of U.S. Gulf oil production have been shut in, according to the Bureau of Safety and Environmental Enforcement.