The Taiwanese Coast Guard and National Airborne Service Corps are searching for 12 missing crewmembers from a Chinese-owned cement carrier that sunk in heavy seas caused by a tropical storm passing over the region. Five additional crewmembers were located and saved by a passing Evergreen Line containership.

The National Coast Guard Administration reports that the 10,000 dwt vessel Xing Shun No 1 registered in Panama first encountered problems on October 30 due to the storm while the vessel was approximately 50 nautical miles to the west of the Port of Kaohsiung. Three crewmembers were injured when a large wave washed over the deck of the vessel. Taiwan’s National Airborne Service Corps responded to calls for medical assistance airlifting three injured crewmembers, including one that had broken his left and two that suffered lacerations, transferring them on Sunday to a local hospital.

On the afternoon of October 31, the vessel which was built in 2014 reported that it had suffered a main engine failure in the storm and was listing. The captain of the 381-foot vessel reported that the remaining 17 crewmembers aboard were preparing to abandon ship into the lifeboats. Some reports indicated that the crew was washed overboard by the waves while others said as at least some were believed to be in the lifeboats. 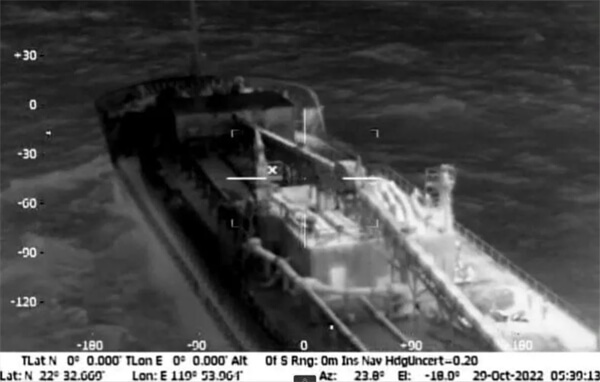 The Coast Guard sent a patrol boat to assist which reported that the Xing Shun No 1 sunk at 8:45 pm local time. Helicopters were scouring the waters with searchlights looking for the crewmembers. The vessel was approximately 14 nautical miles off the coast near the Changhua Waihai Wind Farm when it sunk.

The passing Evergreen vessel located five of the crewmembers in the water and was able to drop them a raft and later bring them aboard. The 12 missing crewmembers are believed to have drifted away possibly in one or more rafts.

The search was continuing on November 1. The Coast Guard reported that empty lifeboats had been spotted off the coast.