After fighting the cargo fire aboard the Almirante Storni for six days, Swedish officials said that the situation remains largely stable, but they have a short window in which to act before weather again worsens the situation. They are also confronting staff fatigue and difficult conditions with ice on the decks and equipment of their vessels.

“My assessment is that since such resources are required over such a long period of time, without still being able to extinguish the fire, we are approaching the situation where a rescue must take place,” said Fredrik Hallerström, the Coast Guard's rescue leader during his update late on December 9. “The situation remains worrying. Now the weather is permissive for a change.”

Since Wednesday night, the Norwegian Coast Guard's KV Bergen, and a commercial offshore supply vessel hired by the owner of Almirante Storni, have been assisting the Swedish Coast Guard. Surveys during the day on Thursday showed that the efforts had been successful in again containing the fire and reducing the fears of an escalation. Thermal images on Thursday showed that the heat transfer had not continued.

The end-of-day assessment was that a slight improvement in the firefighting could be seen by the Coast Guard. They said that the water volumes with the increased resources at the site were dampening more of the cargo, in combination with calmer weather. The Coast Guard said additional surveys would be undertaken on Friday morning with helicopters and drones, which would be used to make a future decision on the next steps in their efforts.

“The ship cannot stay where she is, she needs to be moved to a place in the shelter or to the port,” said Hallerström. “We are speeding up that process, time is running out and the forecast shows that severe weather will soon be here.” 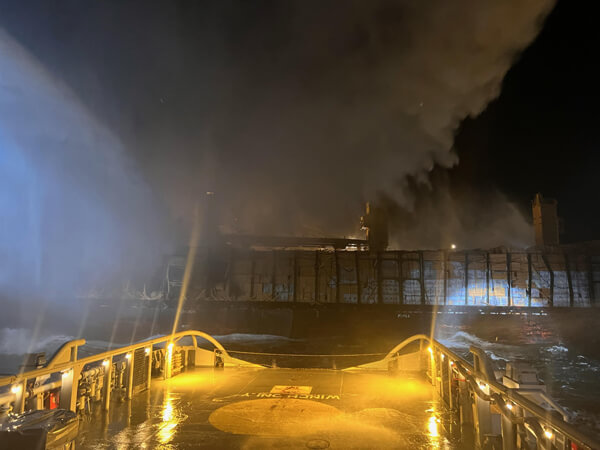 The Swedish Coast Guard continues to say that responsibility for the salvage plan rests with the vessel’s owners, but local media in Gothenburg is reporting that they are advocating for towing the vessel into the harbor or to the pier. Supporting their position are statements from the vessel’s owner that the fire is contained yet port officials and politicians in Gothenburg are reportedly resisting moving the vessel into the harbor. They fear environmental damage and problems that could interfere with the operation of the port.

Gothenburg is Scandinavia's largest port, but the officials are saying the port does not have the equipment to handle timber loads. They are suggested other ports would be better suited to handle the cargo.

The Swedish Transport Agency said that officially discussions are ongoing but that practically a decision has been reached. They said it just remains to make it official with all the authorities.

At the same time, the police are now saying that they suspect arson while the prosecutor’s office says that they are exploring a broader range of potential crimes. The prosecutor’s investigation is ongoing.