Apex Consulting has released its latest Supermajors Cost Index report, saying that development costs may have bottomed out.

The report examines how the industry performed in developing its reserves over the years leading up to 2017. Sector costs were about 16 percent higher in 2017 than in 2011, when the industry was in the midst of significant cost escalation. Among the seven companies analyzed between 2011 and 2017, the report states that Eni’s performance improved the most, followed by Chevron and Total. Although the three-year weighted average development cost per BOE went down for these companies over this period, it increased for the other four companies in line with the wider industry trend.

“ExxonMobil went from having one of the lowest development costs per BOE in 2011 to having the highest amongst the supermajors in 2017,” says Director Muktadir Ur Rahman. 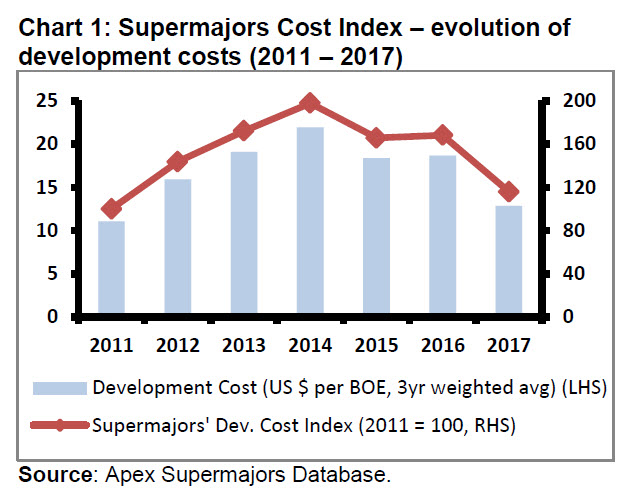 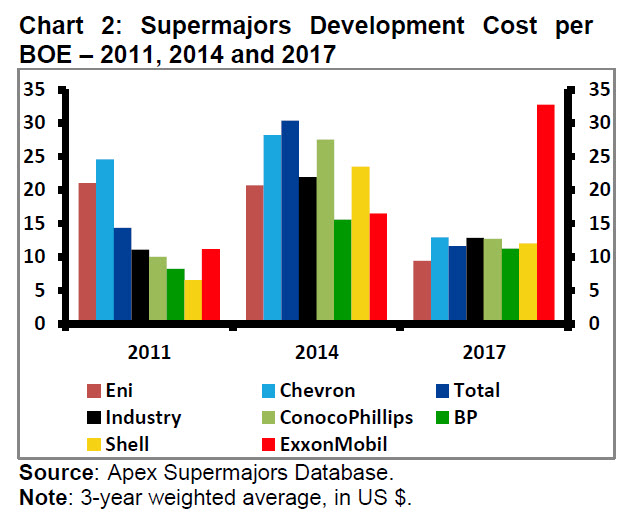 “2018 may turn out to be the year when development cost deflation bottoms out, leading to a rise in the Index in subsequent years. Therefore, the industry needs a new business model, one that encourages greater collaboration and risk-sharing to prevent the recurrence of the runaway cost escalations of the past.”

Back in the early 2000s, emboldened by the expectation of higher oil prices, oil and gas operators made resource and reserves development their primary focus. As a result, the industry spent vast capital sums on developing shale, deep water, ultra-deep water and heavy oil resources. The greater technical risk profile of these resources meant that the costs of developing these assets were higher than the conventional onshore or shallow water developments.

However, excessive focus on volume growth in many cases resulted in poor planning and flawed project execution, says Rahman. “Cost overruns and delays became the norm. The collapse in oil prices from mid-2014 caused wide-scale project cancellations and sharp cuts in upstream investment. This in turn eased pressure on the supply chain and caused service sector costs to decline considerably.

Smaller project footprints, improved efficiency, lower input and service sector costs raised the cost efficiency of the sector significantly. As a result, Apex Consulting's Supermajors Cost Index for 2017 declined by more than 41 percent compared to 2014, when the Index reached its peak.