During the ceremony, USS South Dakota’s Commanding Officer, Cmdr. Craig Litty, highlighted South Dakota’s capability to dominate the undersea domain and enable military success in any engagement. “South Dakota was built to be on scene and unseen, forward deployed and ready to take the fight to our adversaries and protect our shores here,” said Litty.

South Dakota is a flexible, multi-mission platform designed to carry out the seven core competencies of the submarine force: anti-submarine warfare; anti-surface warfare; delivery of special operations forces; strike warfare; irregular warfare; intelligence, surveillance and reconnaissance; and mine warfare. She is the seventh of eight Block III Virginia-class submarines to be built. The Block III submarines are made with the new Virginia Payload Tubes designed to lower costs and increase missile-firing payload possibilities.

The submarine is 377 feet long, has a 34-foot beam, and will be able to dive to depths greater than 800 feet and operate at speeds in excess of 25 knots submerged. She will operate for over 30 years without ever refueling. Construction on South Dakota began 2013; the submarine’s keel was authenticated during a ceremony on April 4, 2016; and the submarine was christened during a ceremony October 14, 2017.

Though in their nineties, some of the Sailors from the submarine’s namesake made it to the ceremony. “It is very impressive and I am very honored to be a part of this,” said Richard Hackley, a seaman 1 st Class (Radar Striker) aboard the battleship USS South Dakota during World War II. “I’ve got fond memories from serving on South Dakota and to be included in the new South Dakota is quite an honor for me.” 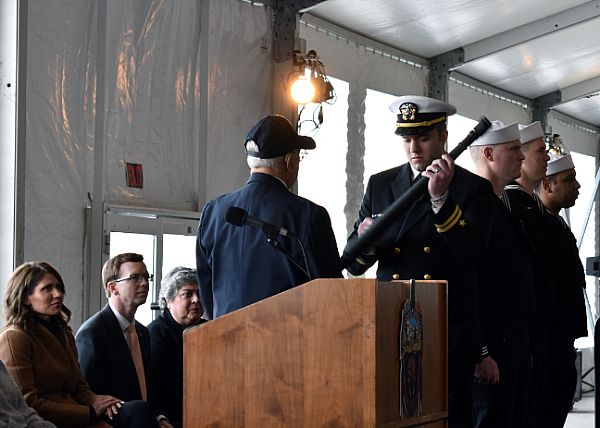 Richard Hackley, a veteran who served aboard the battleship USS South Dakota (BB 57), passes the long glass to Lt. Benjamin McFarland, the first officer of the deck to stand duty aboard the submarine South Dakota, during the boat's commissioning ceremony at Naval Submarine Base New London, Feb. 2, 2019.