Oil spread beyond the known satellite footprint of the Deepwater Horizon oil spill, according to a new study led by scientists at the University of Miami.

The Deepwater Horizon exploded on April 20, 2010 releasing 210 million gallons of crude oil into the Gulf of Mexico over 87 days. Oil slicks from the blowout covered an estimated area of 57,000 square miles (149,000 square kilometers). 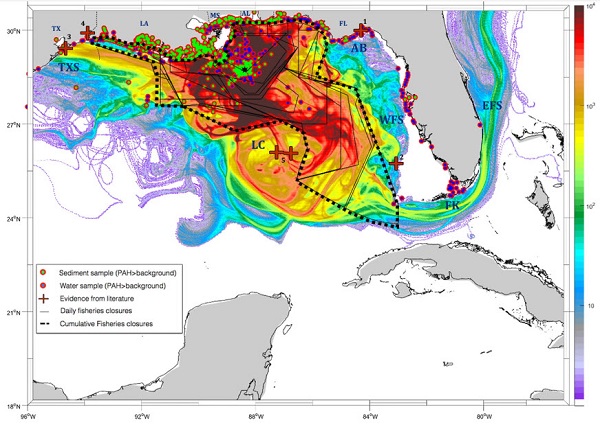 The study demonstrates that large areas of the Gulf of Mexico were exposed to invisible and toxic oil that extended beyond the boundaries of the satellite footprint and the fishery closures. The findings, published in Science Advances, indicate the spill reached the West Florida shelf, the Texas shores, the Florida Keys and along the Gulf Stream towards the East Florida shelf.

“Our results change established perceptions about the consequences of oil spills by showing that toxic and invisible oil can extend beyond the satellite footprint at potentially lethal and sub-lethal concentrations to a wide range of wildlife in the Gulf of Mexico,” said Claire Paris, senior author of the study and professor of ocean sciences the University of Miami Rosenstiel School. “This work added a third dimension to what was previously seen as just surface slicks. This additional dimension has been visualized with more realistic and accurate oil spill models developed with a team of chemical engineers and more efficient computing resources.”

A 2018 study undertaken by Paris showed that massive quantities of dispersants injected at the Deepwater Horizon wellhead - roughly 1,500 meters (4,921 feet) beneath the surface - were unrelated to the formation of the massive deepwater oil plume. The analysis demonstrated that substantial amounts of oil continued to surface near the response site, despite 3,000 tons of subsea dispersant injection.

Dispersants application to manage surface oil spills has been shown to break the oil into small, easily dissolved droplets.  However, the Deepwater Horizon was very different in that the oil entered the system at depth. The turbulent energy and pressure at such immense depths not only contributed to the rapid expansion of the spill, but these natural forces helped disperse oil in micro-droplets and render the dispersant ineffective and unnecessary, according to the study.