Stolt Tankers recently completed a test of a system for in-transit hull cleaning as a tool to improve the performance of its ships and reduce the downtime required for traditional hull cleaning methods in dry dock or employing divers. Reducing marine growth on the hull is important both to improve the vessel’s operations while also reducing the risks of the transfer of invasive species to non-native waters.

Biofouling on ships’ hulls is a major concern for shipping companies as it increases fuel consumption, reducing the ship’s efficiency. As the new environmental measures for carbon intensity come into effect, maintaining the vessel’s efficiency will be a key factor in achieving a better Carbon Intensity Index (CII) rating.

The test was carried out aboard the Stolt Acer as the 18-year-old chemical tanker sailed from Port Said, Egypt to Algeciras, Spain. The vessel, registered in Liberia, is 558 feet long and 29,700 dwt. They were testing Shipshave’s ITCH (In-Transit Cleaning of Hulls) system which is designed to remove early-stage growth from the hull to reduce biofouling.

Shipshave describes ITCH as a semi-autonomous hull cleaning robot tethered to a winch on the forecastle deck. According to the company, the robot harvests propulsion energy to stay attached to the hull and swipe up and down. Soft brushes clean the hull underwater using a defined pattern with controlled brush forces. DNV has performed a consumption assessment calculation and found that Shipshave’s technology can deliver fuel savings of around 10 percent when used regularly. The crew of the Stolt Acer also reported that the device was easy to use, clean, and maintain. 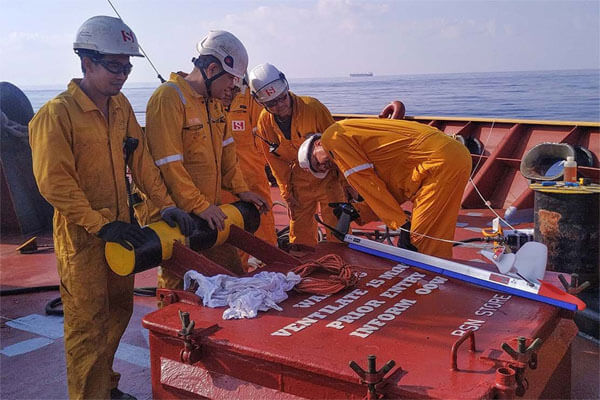 “The results of the initial trial were very positive. We saw a reduction of fuel consumption during the voyage, and this when combined with some of the other technological developments we are investigating will have a significant impact on our overall fuel consumption,” said Jose Gonzalez Celis, Energy and Conservation Manager at Stolt Tankers.

Until more environmentally friendly fuels are readily available, Stolt Tankers reports that it is exploring several technical solutions to support the transition to a low-carbon maritime industry and plans to expand the Shipshave trial to five more ships. Stolt believes that a greener future will require the right combination of new technical solutions, technology, and future fuels.

“Traditionally, ship owners tend to have a reactive approach to vessel maintenance, rather than taking preventive measures,” said Lucas Vos, President of Stolt Tankers. “As part of our continuous improvement mindset, we have turned that idea on its head and found that taking a more proactive stance before biofouling has a chance to settle on a ship’s hull is a far more sensible approach.”

Stolt Tankers reported in 2021 that it had reduced its fuel consumption by six percent compared to 2020. The related reduction in CO2 emissions was equivalent to removing 18,000 cars from the roads for a year. The company has also tested the use of biofuel as well as shore power for its ships to cut emissions.