The Sri Lanka Ports Authority is reporting that they assisted in diffusing a potentially dangerous situation aboard a containership after the vessel reported a leak in a dangerous cargo it was transporting. While the situation might have been routine, what made it especially poignant was the recent loss of the new vessel the X-Press Pearl off Sri Lanka also due to a leak in dangerous cargo. Experts label misdeclared and poorly packed dangerous cargo as one of the most significant threats to vessels.

In the recent case, the 50,869 dwt containership Seaspan Lahore, operating under charter to Hapag-Lloyd, departed Mundra, India on July 26 heading westward. Six hours after departure, the captain contacted the ship’s agent reporting that the crew had discovered a leak believed to be nitric acid coming from a container loaded on the ship bound for Africa.

The agent was in touch with the Sri Lanka Ports Authority and the container terminal operated by SAGT. A review of the manifest showed that the container aboard the vessel contained 650 drums of nitric acid, which used in the manufacture of fertilizers and explosives is extremely flammable. The X-Press Pearl was reported to be carrying 25 tons of nitric acid on its final voyage, with ports in the Middle East reportedly refusing to handle the leaking container after it was discovered by her crew.

In the case of the Seaspan Lahore, the harbormaster of the SPLA working with the agents reviewed the ship’s manifests and with the captain the cargo loading plan. They sought to determine the location of the leaking drums and the adjacent cargoes.

The chairman and the harbormaster of SLPA decided to berth the vessel in Colombo. The vessel was diverted, arriving on July 28 and during a two-day operation, the container was off-loaded and opened under the supervision of a trained crew. They repackaged the cargo into new drums and cleaned the containers to ensure that the risk had been mitigated. 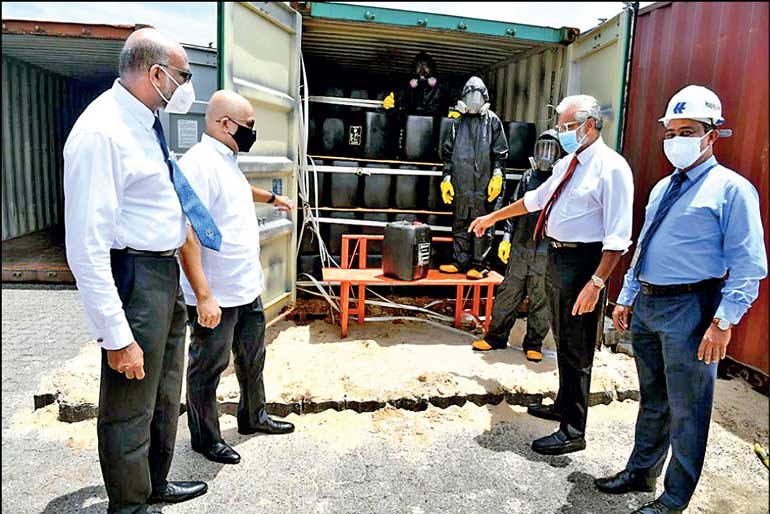 “When notified of the decision, the Minister of Ports and Shipping, the Hon. Rohitha Abeygunawardena of Sri Lanka, gave me his blessings to carry on and I thank him very much for the confidence placed in me,” said Chairman of the SPLA Capt. Nihal Keppetipola.

The reworking of the cargo was completed with the port fire brigade standing by and with the assistance and participation of SLPA officials and crew, SAGT officials, officials of Hapag-Lloyd Lanka Pvt Ltd., and the personnel from Hamka Shipping specialized in the operation. The chairman of the SPLA reports that when they entered the container the team said the bottom of the container was already partially eroded raising the potential for a fire. He said if the vessel had delayed even another day, it could have had a fire aboard.

They thanked everyone involved in the successful operation noting that the Sri Lanka port has
the experienced officers and geared to handle such situations and have successfully carried out on several occasions in the past.

The Seaspan Lahore departed Colombo on July 30 and has resumed its voyage to Durban, South Africa, where it is expected to arrive on August 10.