The Times of Israel reports that 60 senior rabbis have called for end to live animal shipments. The calls come in the wake of an exposé by Animals Australia broadcast on 60 Minutes last month. Footage from the documentary was subsequently broadcast on Israel’s Hadashot news. “They literally cook from the inside while alive during the journey,” veterinarian Yuval Samuel told Hadashot.

In a letter released on Thursday by animal rights activists, Rabbi Yehuda Deri, chief rabbi of the southern city of Beersheba and a member of the Chief Rabbinate’s Council, is reported to have called on every rabbi in Israel to protest the long-distance shipments of sheep and cattle for fattening and slaughter in Israel. “Whoever buys this meat is a partner to and helps those committing an evil crime." 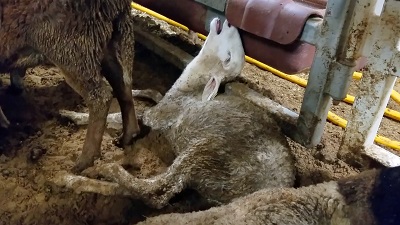 Calls to end the trade continue in Australia. Most recently, RSPCA Australia called on the government to stop what it calls “a high-risk ship” about to arrive in Adelaide. The organization says the livestock carrier Al Shuwaikh must not be allowed to leave until the findings of the current government review into the live export industry have been released.

The Kuwait-flagged ship was built in 1986, and the exporter is Emanuel Exports, the company at the center of the current live export scandal after whistle-blower footage was aired on 60 Minutes.

“It’s also one of only three remaining twin-tier ships, which are set to be phased out as part of the current maritime safety review on the grounds that they are unacceptably dangerous for animal welfare,” says RSPCA Australia Chief Science and Strategy Officer Dr Bidda Jones.

“These sheep will be arriving in the Middle East in late May, early June, and that’s when some of the damning footage we’ve seen was captured,” says Jones. “Yet again, we cannot see how the Secretary of the Department [of Agriculture] could possibly meet his regulatory obligations and be satisfied that the travel arrangements are appropriate for the animals’ health and welfare...

“It’s quite extraordinary that given the current environment, this export is even a possibility,” said Jones.

The RSPCA made a written submission to the government's review last week, highlighting two points:

• Voyages during the May-October period must cease. The evidence is clear that regardless of any proposed changes to stocking density or other conditions, sheep will suffer and die during this period as a consequence of heat stress.

• Sheep on board all voyages must have sufficient space to be able to easily access feed and water and lie down at the same time. In order to meet these basic requirements, current space allowance must be at least doubled.

In its submission, the RSPCA says, “When it comes to the long-haul sea transport of sheep, [multiple previous] reviews have failed to protect sheep from suffering and the risk of death because they have allowed the economics of the industry to override animal welfare requirements. This cannot continue.”