The Republic of Singapore Navy (RSN) has commissioned two littoral mission vessels RSS Justice and RSS Indomitable and opened a simulation center for training crews of the vessels at Tuas Naval Base.

The vessels are built to be easily configured for a variety of mission including coastal security, maritime patrol and surveillance missions, humanitarian assistance, disaster relief and search and rescue missions.

Designed and built locally by ST Marine, the Independence-class vessels have better sea-keeping and endurance and can be manned with a smaller crew than the Fearless-class patrol vessels that they supersede. The network-centric ships possess advanced radars and sensors, as well as a 360 degree out-the-window view and improved sense-making systems to enhance situational awareness and accelerate decision-making. 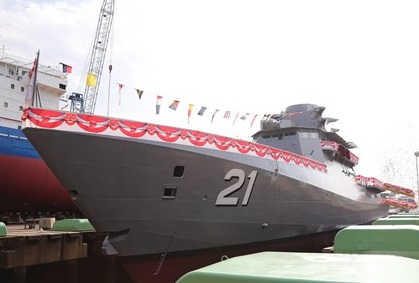 The first three vessels in the class, RSS Independence, RSS Sovereignty and RSS Unity, have been put to test since their commissioning last year, participating in various exercises with foreign counterparts in the region, including the inaugural ASEAN Multilateral Naval Exercise in Thailand last year as well as bilateral exercises with Thailand and Indonesia this year. The remaining three vessels are expected to be operational by 2020. The seventh vessel RSS Dauntless was launched in August this year. The sixth, RSS Fortitude was launched in March.

Speaking at the ceremony, Second Minister for Finance and Education Indranee Rajah, said: “Today, maritime trade remains vital for modern Singapore, contributing seven percent to our GDP each year and sustaining about 170,000 jobs for Singaporeans. As a maritime nation in a maritime region, Singapore's security and success are inextricably linked to the sea. We rely on freedom of access to the sea without the burden of tariffs for economic prosperity.

“It is therefore critical that the Singapore Strait and the Malacca Strait remain open and undisrupted. In this regard, the role of the RSN is crucial to Singapore's survival as a nation. The RSN secures our Sea Lines of Communication, safeguards our continued free access to the sea, and protects our way of life.”

Features of the Simulator 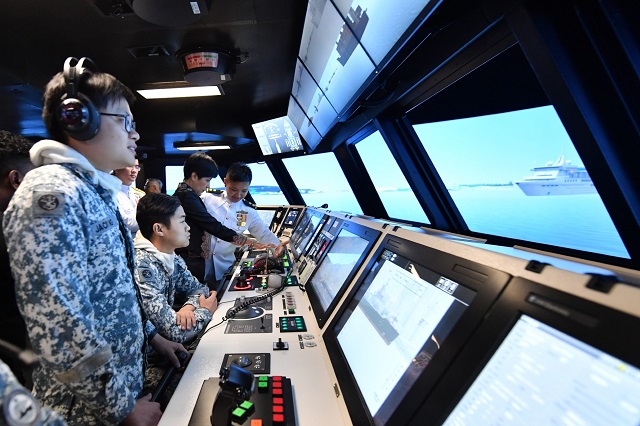 The simulator is constructed to be an exact replica of the Integrated Command Centre in the littoral mission vessels. The high fidelity 360º projection is projected from 15 high-definition projectors onto a continuous screen (4.1m height by 25m diameter) surrounding the simulator, which provides “out-the-window” view of the simulated environment experienced by crew. The projection accurately depicts island groups, landmarks, vessels, aircraft, human behavior as well as a wide range of weather and sea conditions. The projection technology used is the first in training simulation centers in Southeast Asia. Additionally, virtual reality goggles immerse operators into the training environment, complete with high-definition images and increased depth perspective for challenging scenarios such as bringing the ship alongside a berth.

The Simulation Centre provides crew with the ability to conduct targeted training for a full range of operational scenarios, at the operator, cluster and team levels. At the team level, the bridge, engineering and combats teams are trained simultaneously as one integrated team. The Centre's two simulators can be configured to run separate missions concurrently or in a combined scenario for two ship crews to train together in a joint mission. Such targeted training optimizes resources, reduces training time and facilitates specific training requirements without the need to deploy the full crew out to sea. For example, training to bring a ship alongside can now be completed with just four ship crew in less than one hour, instead of requiring a full ship crew of 23 more than four hours.

The simulator replicates demanding environmental situations such as harsh weather conditions with low visibility, high sea states and high traffic density in congested waters, to provide the crew with a training experience that mimics the real training out at sea. The simulator is also supported by an artificial intelligence system, so only a single instructor is required to operate the simulator to provide the training.

Norway's Ministry of Petroleum and Industry has approved the plans for development and operation of the Hywind Tampen wind farm which will mean the Snorre and Gullfaks platforms will be the first platforms in the world to receive power from a floating offshore wind farm. The wind farm will consist of 11 wind turbines based on the Hywind wind farm concept developed by Equinor. The 8MW turbines will have a total capacity of 88MW and meet about 35 percent of...

NSW Police have seized the black box of the cruise ship Ruby Princess as part of an investigation to determine who is responsible for letting the vessel's 2,700 passengers disembark in Sydney, Australia, without quarantine on March 19. There are now 361 passengers and 18 crew members that have tested positive for COVID-19, and there have been six deaths in NSW associated with the vessel. Australia-wide, the Ruby Princess has been linked to more than 600 coronavirus cases and...