Demonstrating the ability to retrofit wind propulsion capabilities to older vessels, Dutch shipping company Amasus Shipping announced it will work with Spanish bound4blue, to add two rigid sails to a 22-year-old general cargo ship. The company expects to reduce its energy consumption and emissions while also demonstrating the technology.

The 2,800 dwt cargo ship EEMS Traveler operated by Amasus Shipping will be fitted this year with the two rigid sails which will be located on the stern of the vessel. The vessel, which is 298 feet long, operates as a short sea cargo ship in Europe with a capacity to transport up to 150,000 cubic feet of grain or containers or large cargo. Each of the rigid sails will stand approximately 56 feet in height and according to the companies in favorable conditions are expected to reduce CO2 emissions by up to 30 percent.

In addition to the reduction in emission, they report that the rigid sails will also reduce the vessel’s Energy Efficiency Existing Ship Index (EEXI) and improve the Carbon Intensity Indicator (CII). This will further extend the vessel’s compliance with the IMO measures aimed at reducing the carbon intensity of international shipping.

José Miguel Bermúdez, CEO of bound4blue said, “Our eSAIL is a commercially available, proven, and reliable technology that turns wind into profit while reducing the carbon footprint of ships. Collaborating with the Amasus Shipping team in this multiple sail installation is an opportunity to show again that general cargo ships, which account for roughly twenty-seven percent of the world merchant fleet, can benefit from wind propulsion.”

A similar unit was installed in December 2021 on M/V La Naumon, a retired general cargo ship that is now operating as an itinerant theatre-ship hosting arts programming as well as an onboard laboratory. The installation was part of a demonstration project in part co-funded by the European Union, in the framework of the GREENing the Blue project (CINEA – European Climate, Infrastructure and Environment Executive Agency). 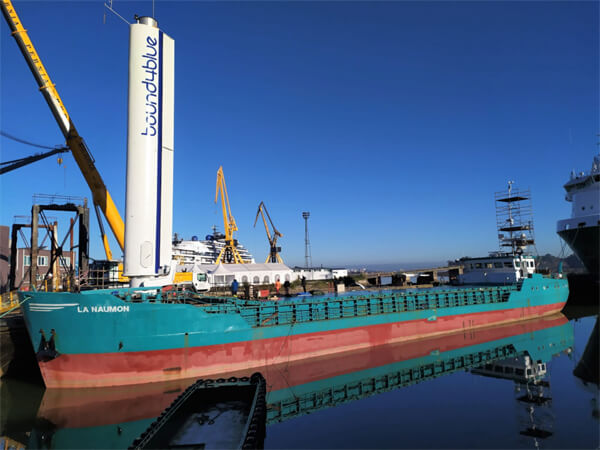 Standing approximately 59 feet off the deck, bound4blue said it was the largest suction sail ever built and installed on a ship. They explained the operation saying that the rigid sail is equipped with a tilting mechanism and an autonomous control system.

“Our rigid sails are quick and simple to install. Before the installation, a detailed vessel transformation project is performed and submitted to the Class Society and Flagging State for approval. Later, prior to the installation, the foundation and electrical work is completed. The installation can then be performed afloat, like in the case of La Naumon, during a scheduled drydocking or during any port call, as the operation takes less than a day,” said Bermúdez.

In 2021, bound4blue reports it installed its eSAIL system on two vessels and signed additional agreements with other shipowners to extend the system to their fleets in 2022 and 2023.