In the latest advancement in the use of battery-powered ferries around the world, Shell’s Singapore operations announced plans to introduce fully-electric ferries to replace conventional diesel-powered ferries currently used to transport passengers to its facilities.

The new vessels will be the first fully-electric ferry service in Singapore, a first for Shell globally, and a first for Penguin International Limited, which won the international tender to design, build and operate the ferries. The program is in keeping with the goals of the Maritime and Port Authority of Singapore to decarbonize operations in the busy port area.

“Shipping’s future will involve different parts of the sector using different fuels, and electrification is a solution to decarbonize short voyages, including port operations,” said Nick Potter, General Manager of Shell Shipping and Maritime, Asia Pacific & Middle East. “Switching to zero-emission, fully-electric ferries is part of Shell’s ambition to help accelerate progress towards net-zero emissions in the shipping sector. I thank Penguin and the Maritime and Port Authority of Singapore in supporting this shared ambition.”

Penguin said that it will be working with its project partners Incat Crowther and Razor Blunt Labs to design, build, own, and operate pure electric ferries and shore chargers for Shell’s Energy and Chemicals Park on Pulau Bukom, Singapore.

The fully-electric ferries are powered by a lithium-ion battery system with a capacity of 1.2 MWh and run at speeds of over 20 knots with zero emissions and noise. When berthed at Shell Bukom, the ferries will be charged via a combination of fast charging during peak hours, and slow charging during off-peak hours and overnight. Penguin’s scope of works includes designing, installing, and operating ultra-fast shore chargers on Pulau Bukom that are capable of recharging each ferry in under 10 minutes. 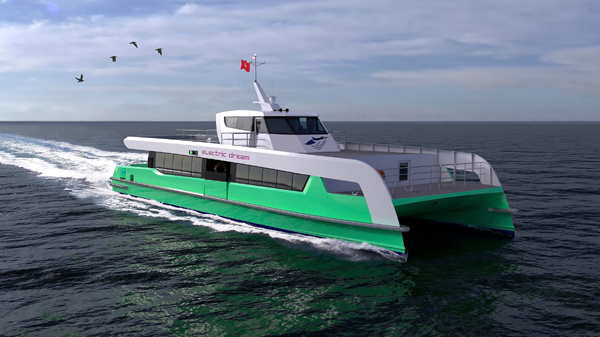 Expected to set sail in the first half of 2023, there will be at least three new 200-seater single-deck ferries that will be used to transport passengers between the mainland and Shell’s site. The approximately three-mile ferry route near the Straits of Singapore is a busy connection that transports around 3,000 passengers a day, or an estimated 1.8 million passenger trips annually, according to Shell.

Electric and battery operations are becoming an increasingly attractive option for short-sea ferry operators. Worldwide an increasing number of projects are using battery-powered ferries as a means of achieving zero carbon admissions and enhancing operations.