A second survivor has been located from the livestock carrier Gulf Livestock 1 lost two days ago in a typhoon according to reports from the Japan Coast Guard. The search and rescue operations are continuing in a race against time as a second, potentially even larger, typhoon is nearing the area.

The Japan Coast Guard announced this afternoon, September 4, that it had located a survivor in life raft approximately a mile from Kodakara Island in the East China Sea. The Gulf Livestock 1’s last known position was south of there about 115 miles west of Amami Oshima island. Winds from Typhoon Maysak and tides are believed to have carried the raft away from the sinking. The 30-year old Filipino sailor was reported in good condition and taken a hospital. The first survivor, who was discovered on Wednesday, also remains in a hospital. The Philippine Department of Foreign Affairs said that it was working to repatriate him to the Philippines once COVID-19 protocols are cleared.

Earlier in the day on Friday, the Japan Coast Guard also pulled an unconscious sailor from the water. Found floating face down in a lifejacket, the sailor was pronounced dead at a local hospital. The Philippine Department of Foreign Affairs said identification was pending on this person but that he was in a blue jacket with the label “Fitter” on it. 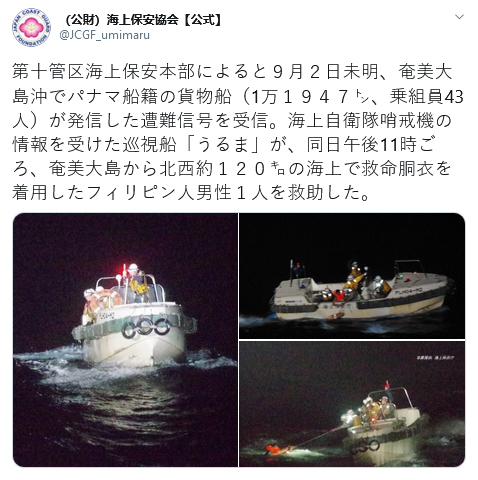 Additional debris has also been spotted in the water including a lifeboat that shows signs of significant damage as if it was torn from its davit and other breaks in its structure. It was floating upright but empty. The Japan Coast Guard also saw a small oil slick believed from the vessel.

The bodies of several of the cattle the ship was transporting were also found floating in the water. The Gulf Livestock 1 had 5,800 head of cattle on board bound from New Zealand to China when it encountered the typhoon and issued its distress call early on September 2. The Japan Coast Guard said that the first survivor reported the ship lost power in the storm, began to list, and they were ordered into lifejackets before the ship capsized. Reuters in Manila is reporting the captain and chief engineering had both been texting their families showing the extent of the storm and saying they were praying for it to pass.

The Gulf Livestock 1 was carrying a crew of 43 of which 39 were from the Philippines. The Philippine Embassy in Tokyo, the Philippine Consulate General in Osaka, and the Philippine Overseas Labor Office are all coordinating with the ship’s managing agency and the Japan authorities.

The shipping company, Gulf Navigation Holding based in Dubai, UAE also issued a brief statement yesterday saying that it “deeply regret to report the incident.” A spokesperson for Gulf Navigation states, “Our hearts go out to those on board and their families at this time. We also express deep regret for the sad loss of the livestock on board. We are monitoring the situation closely and working closely with those involved in rescue efforts. We pray that there are other survivors.”

Additional search and rescue efforts in the area will likely be hampered by what is being called Super Typhoon Haishen. Expected to be one of the strongest storms to ever hit the area, the typhoon is currently a category 4 storm with 155 mph winds. It is following a similar track to the storm earlier in the week and is expected to pass along the southern end of Japan by Sunday morning before making landfall on the Korean peninsular.