The U.S. Coast reported that more than 48-hours after the liftboat Seacor Power capsized eight miles off Louisiana that its crews are continuing the search efforts. While the efforts continue in the Gulf of Mexico, the incident has also been declared a major marine casualty clearing the way for a thorough, multi agency investigation.

Coast Guard air and surface craft continued to search overnight and through the day today looking for any signs of the 12 missing crew from the Seacor Power. Officials reported as of late this afternoon that the effort has searched for a combined 70 hours covering approximately 6,380 square miles, an area roughly the size of Hawaii.

The search has involved four USCG cutters, rescue boats, at least three helicopters, two Ocean Sentry airplanes, and a Hercules airplane crew, as well as crews from the Louisiana Department of Wildlife and Fisheries, Port Fourchon Harbor Patrol, Port Fourchon Sheriff's Department, the Lafourche Parish Sheriff’s office, and a commercial air medical service crew. Private boats also joined in the initial response helping to rescue survivors from the water and in the search. 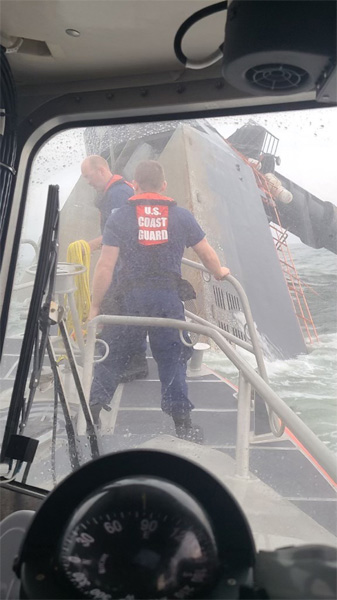 Divers were on scene today to conduct an assessment and begin operations in support of the ongoing search and rescue effort. Unconfirmed reports are saying that it is believed that many of the missing crew may still be aboard the partially submerged vessel, including possibly in the engine room which has so far remained partially above water. Weather conditions in the Gulf of Mexico continued to be challenging slowing the divers' progress.

The liftboat departed Port Fourchon mid-day on April 13 and is believed to have encountered a weather phenomenon known as a microburst, which had straight-line winds reaching hurricane force, strong rainstorms, possibly thunder, and created high seas. Good Samaritan boat crews and the USCG located six survivors in the water after the vessel capsized.

The Coast Guard also reported finding the unresponsive body of an additional person floating in the water. Officials late today confirmed that the body recovered was that of Captain David Ledet, 63, of Thibodaux, Louisiana.

The tight-knit community has been working to support the families of the missing crew along with local officials that have been holding briefings with the family members at the Port Fourchon firehouse.

The incident has also been officially declared a major marine casualty with the U.S. Coast Guard leading a preliminary investigation. The National Transportation Safety Board will be joining in that effort. Under the rules governing an investigation, major causalities include vessels over 100 tons, financial damage greater than $2 million, or the death of six or more people.