The environmental organization Sea Shepherd has received a vessel donation from philanthropist Benoit Vulliet which will be used in the organization's campaign to save the most endangered marine mammal in the world, the vaquita porpoise. 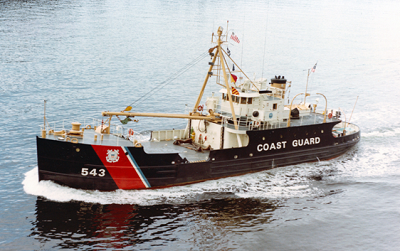 The vessel is former U.S. Coast Guard Buoy Tender White Holly. The vessel was built at Basalt Ship Building in 1944 and served in World War II in Pearl Harbor delivering ammunition to naval vessels. She was acquired by the Coast Guard in 1946 and served until the 1970's protecting the Alaskan coastline. The vessel was later transferred to Mississippi as a Buoy Tender to restore aids to navigation damaged by hurricanes until her retirement from the Coast Guard in 1998. Sea Shepherd also operates three former U.S. Coast Guard Island Class Cutters currently engaged in marine conservation and anti-poaching operations.

The vessel’s first new mission as part of the Sea Shepherd fleet will be joining their campaign in Mexico’s Sea of Cortez. The campaign aims to save the critically endangered vaquita porpoise. Vaquitas are endangered because of gillnet poaching, mostly meant to catch the totoaba fish. Like the vaquita, the totoaba is endemic to the Sea of Cortez and critically endangered. The fish are being heavily targeted for their swim bladders, which are illegally sold for exorbitant amounts of money in Asian black markets. It is said that a totoaba bladder can fetch up to $20,000 in China.

“Coast Guard Buoy tenders have low freeboard and large working decks, just what our dedicated volunteers crew members need to pull illegal nets efficiently from the sea. The ship is also very fuel efficient, which means we will be able to stay at sea for longer periods while ridding the vaquita refuge of illegal gillnets,” said Sea Shepherd’s founder and CEO Captain Paul Watson. Acoustic monitoring estimates from 2015 showed that less than 30 vaquita were still alive. This data triggered varied reactions from the scientific and conservation community including the notion that trying to save the vaquita porpoise is a lost cause.

White Holly will now undertake major refit work in Fernandina Beach, Florida, and is scheduled to depart for Mexico via the Panama Canal in December.