Sea-Intelligence Forecasts Atlantic Spot Rates Are About to Collapse

Sport freight rates have been on the decline for many of the world’s shipping routes through much of the second half of 2022. As volumes declined, especially on the trans-Pacific routes, carriers reported that rates were dropping. On the Atlantic routes where demand remained stronger, carriers were able to maintain higher rates.

“While freight rates have been dropping consistently on most trades, they have remained elevated on the trans-Atlantic due to capacity issues,” explains Alan Murphy, CEO of Sea-Intelligence. “However, this is about to change, as carriers are injecting serious amounts of capacity on the trade lane.”

U.S. East Coast ports reported strong volumes and continued gains through much of the fall in part due to the shifting of cargoes from West Coast ports. The Port of New York and New Jersey became the busiest port (by volume) in the U.S. while others such as Savannah experienced congestion and growing backlogs. Carriers ranging from CMA CGM to Zim all reported increasing capacity in part with larger vessels.

According to Sea-Intelligence, capacity growth from North Europe is scheduled to begin spiking from mid-December 2022. The data analytics firm projects that it will reach an initial peak at the end of the month, with year-over-year capacity up by as much as 43 percent. With an early Chinese New Year holiday and carriers expected to start curtailing capacity on the Pacific by mid-January and continuing after the holiday, Sea-Intelligence reports the current deployment reports from the major carriers indicate capacity growth by February will be up by 48 percent on Atlantic routes. 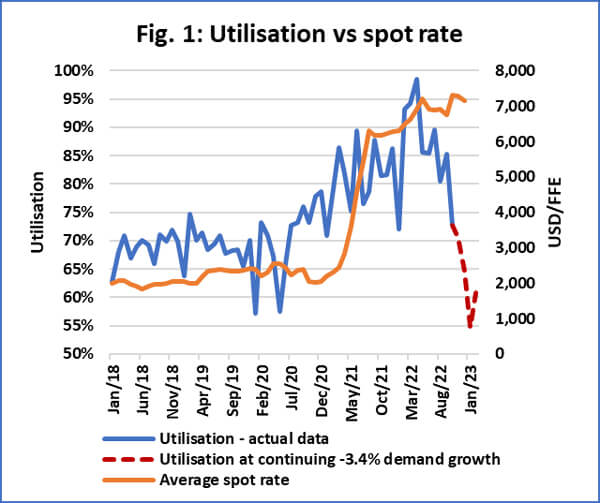 “This is at odds with demand growth (or lack thereof), as demand was down by 3.4 percent year-over-year between August and October 2022,” says Murphy. He notes, “certainly not warranting the level of capacity injection currently planned.”

Starting in mid-December 2022, Sea-Intelligence calculates that the operated capacity on the North Europe-North America East Coast routes will shift from being roughly at the same level as pre-pandemic in 2019 to being 20 percent higher. By mid-February 2023, they report capacity is poised to jump even further to 30 percent above 2019 levels.

The impact of spot rates will be dramatic according to Sea-Intelligence. Assuming that demand continues to decline at the same rate of 3.4 percent, they calculate utilization could drop from 75 percent at the end of the summer to a low of 55 percent.  (See figure 1).

“Given this time lag, and based on the current drop in utilization, spot rates on the trans-Atlantic routes are primed to collapse in the coming months,” concludes Sea-Intelligence.