Just over a third of all containerships were able to maintain their schedule in 2021 reports analytics and consulting service Sea-Intelligence in the 2021 Global Liner Performance report. According to CEO Alan Murphy, the liner industry dropped to 35.8 percent schedule reliability down from nearly 64 percent in 2020 and 78 percent before the pandemic in 2019.

“The average delay for late vessel arrivals has been on an upwards trend since the lowest recorded delay of 3.19 days in 2016,” notes Murphy. “In 2021, the figure nearly touched the 7?day mark,” ending the year with an average of 6.86 days. That compares with 5 days in 2020 and a historical range of 3 to 4 days for the industry.

All six major east-west trade lanes Sea-Intelligence reports recorded double-digit year over year declines with the routes between Asia and Europe of the North America West Coast each reporting reclines of over 40 percentage points. Currently, at the bottom of the list is the Asia to North America West Coast where schedule reliability is just over 10 percent. 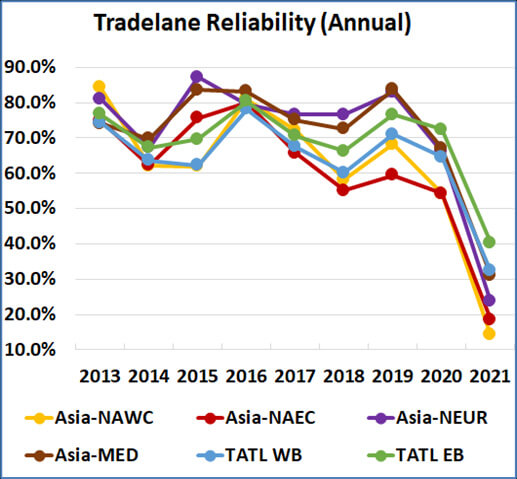 There might be some signs of at least temporary relief coming this month, possibly in part due to the beginning of the lunar new year celebrations. The Marine Exchange for Southern California which manages traffic for the Southern California ports has highlighted in the last few days that the backlog is down to under 80 containerships registered and slow steaming toward Los Angeles and Long Beach. It is the first time since the fall of 2021 that the number has been at that level. It is also a significant decline from when the backlog peaked at over 100 containerships. Arrivals are back to historic levels and demonstrating the success of the new vessel management system only four containerships are currently at anchor with as of February 74 slow steaming toward the ports.

While noting that the system is so far out of balance that there is no historical precedence, Murphy and the analysts at Sea-Intelligence are looking toward the history for an indication of when the supply chain might normalize and schedule reliability rebound toward baseline. Using the only historical model they could find, which was the 2015 U.S. West Coast labor dispute, Murphy forecasts it could take at least eight to nine months for a recovery in reliability.

“Currently, schedule reliability on Asia-NAWC is just 10.1 percent, which is not markedly different from the 12.6 percent recorded in February 2015, suggesting a return to pre-pandemic normality would also be 8 to 9 months,” says Murphy citing the same time frame as it took in 2015. “If the current port and hinterland system manages the same speed of recovery this time, the delays also suggest that resolution would take 8 to 9 months.”

The major carriers have also been forecasting that it would be well into 2022 before the markets began to stabilize. Maersk in its outlook for investors said yesterday that it looks to the beginning of the second half of 2022 for the first stabilizing of the market. Hapag-Lloyd’s CEO Rolf Habben Jansen told journalists on Monday that they expected the pressures to ease in the second quarter but warned it could take six to eight months for the markets to fully normalize. Sea-Intelligence’s Murphy concluded on a less optimistic point saying that the market is showing no indication that it has started on the path to recovery.