The search continues, but, hope is fading for finding the crew of the Argentinian submarine ARA San Juan alive. The submarine disappeared last Wednesday, and the navy said an event "consistent with an explosion" was detected near the submarine's last-known location. 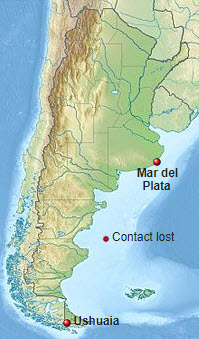 The San Juan was returning from a routine mission to Ushuaia, near the southernmost tip of South America, when it reported an electrical breakdown related to the submarine's batteries.

More than 12 countries are involved in the search which is being conducted with around 27 ships and 18 aircraft, along with tens of fishing vessels. The search operation is carried out under the auspices of ISMERLO, an international organization of over 40 countries set up in 2003 following the Kursk submarine disaster.

Graeme Gibbon-Brooks, CEO of Dryad Maritime and former Principal Warfare Officer routinely involved in submarine safety and searches, says it is unlikely that the submarine is on the surface. “They've had enough air assets across it that if it had been on the surface within the search area, they'd have found it.”

Beneath the surface, a submarine covered in anechoic tiles for stealth would be extremely difficult to find. It's like looking for your car keys on a rugby field using a drinking straw, says Gibbon-Brooks. “The nuclear monitoring organization that heard the non-nuclear explosion won't have much more detail than they've already provided. You have to be quite careful in correlating one with the other. There is a very strong possibility that the explosion is connected with the submarine, but at this stage, it's not certain.”

One of the possible outcomes of an electrical fault involving the batteries of a diesel-electric submarine is an explosion, he says, but weapon problems could also be the cause, as with the Kursk. The Kursk incident demonstrated that some of the compartments in a submarine can remain water-tight after such an explosion. However, it is unlikely that the San Juan crew could make a free ascent to the surface from the presumed depth that the submarine would be at if it were on the seabed, says Gibbon-Brooks.

Argentine President Mauricio Macri has promised an inquiry into the disappearance of the submarine. He said the 34-year-old submarine had recently undergone a refit and was in perfect condition.