Salvors Call for Dredges and Tugs to Free Stranded Ever Forward

After a series of inspections along with a review of conditions in the Chesapeake Bay, salvage experts have completed a tentative rescue plan for the grounded containership Ever Forward which will now be reviewed and approved by the unified command led by the U.S. Coast Guard that is overseeing the rescue operation. The plan involves dredging and then coordinated to the tide cycle they hope to use brute force to pull the vessel back into the shipping channel.

“It’s essentially stuck in the mud,” said Coast Guard Petty Officer Cynthia Oldham, spokesperson for the U.S. Coast Guard Mid-Atlantic which is working with the Maryland Department of the Environment, and other state and local authorities. The Coast Guard highlighted that the large size of the Ever Forward and the container stacked high on the vessel make it more difficult to refloat the vessel.

Evergreen appointed Donjon Smit, a joint venture between Donjon Marine and Smith Salvage America, as salvor for the Ever Forward. Evergreen also appointed Smit for the salvage of the Ever Given in 2021 in the Suez Canal.

On Thursday, the unified command met involving federal, state, local, and private partnerships to review the plans. William Doyle, Executive Director for the Port of Baltimore reported progress including that the underwater inspections by the salvage team continued to show no apparent damage and no pollution spills. However, bad weather at the site on Thursday, including heavy fog in the Chesapeake hampered operations. 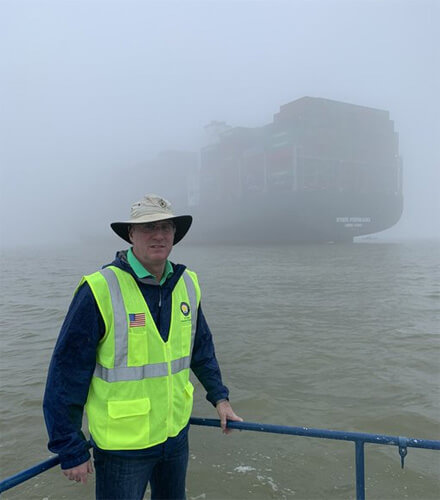 Thick fog on the Chesapeake on Thursday (William Doyle/Twitter)

Evergreen is reporting after analysis the refloat plan calls for bringing in dredgers which will be used to excavate around the stranded vessel to remove part of the mud. The goal is to increase the buoyancy of the hull and increase the clearance between the propeller, rudder, and the seabed to ensure the safety of the ship when they attempt to reposition it into the channel.

“The rescue team is mobilizing all available local tugboats to join in the refloating operation,” according to a spokesperson for Evergreen. “After sufficient mud is excavated, the amount of ballast water on Ever Forward will be adjusted to reduce the ship’s weight and the refloating operation will begin using both the tugboats and the power of her main engine.”

No official cause of the grounding has been released, but local experts are speculating that a late winter storm passing the area on Saturday may be contributed. They are highlighting that the National Weather Service issued a warning for a condition known as “blowout tides” for Saturday into Sunday. Strong northwesterly and westerly winds such as those with the storm drive water out of the Bay lowering the tides.

No timeline was released for when the next phase of the salvage operation would begin.