Russia has commenced a project for the construction a self-propelled North Pole research platform able to operate autonomously for up to three years in ice-covered waters.

Construction of the €98 million ($120 million) vessel is expected to get underway in 2019. The platform will be named North Pole and will be operated by Roshydromet, the federal meteorological service.

The Soviet Union and later Russia has had floating research stations in the Arctic since 1937. In recent years, research stations have been set up on an ice floe in September-October with around 20 scientists over-wintering there. However, it has become increasingly difficult to find ice floes solid enough to hold a station.

Russian research has encompassed marine life, meteorology and natural resources. Recent research has also focused on studying the Lomonosov Ridge to collect evidence that could strengthen Russian territorial claims to the seabed in that region within the Russian sector of the Arctic. As climate change makes the Arctic more accessible, Russia, along with other countries, is looking to use the Arctic to increase its energy resource production. According to the U.S. Geological Survey, there are 90 billion barrels of oil and 1,670 trillion cubic feet of natural gas north of the Arctic Circle. 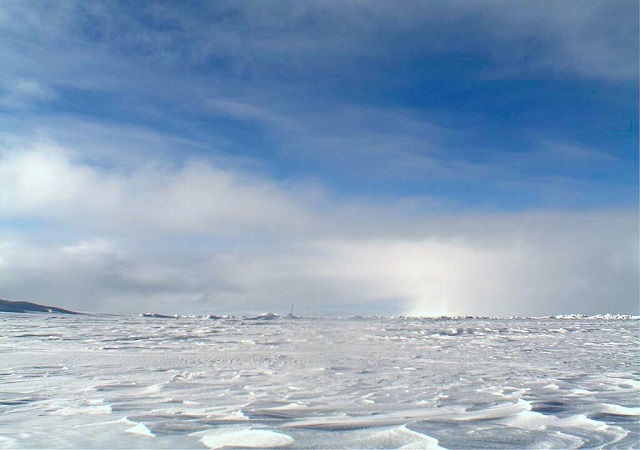 The North Pole is the northernmost point on the Earth. It defines geodetic latitude 90° North, as well as the direction of true north. At the North Pole all directions point south; all lines of longitude converge there.

The sea depth at the North Pole has been measured at 4,261 meters (13,980 ft) by the Russian Mir submersible in 2007 and at 4,087 meters (13,410 ft) by USS Nautilus in 1958. The nearest land is usually said to be Kaffeklubben Island, off the northern coast of Greenland about 700 kilometers (430 miles) away. The nearest permanently inhabited place is Alert in Nunavut, Canada, which is located 817 kilometers (508 miles) from the Pole.