The Sunshine Glacier has shrunk by one seventh in 20 years – an area the size of more than 130 football pitches has melted away. Just two decades earlier, where HMS Protector’s small survey boat visited had been a towering wall of ice some 700 meters from the glacier’s current terminus.

The icebreaker and survey ship recorded the worrying changes when she visited Coronation Island – a forbidding lump of rock and ice 45 kilometers long and the largest isle in the South Orkney chain.

It was the first visit to the inhospitable, uninhabited island – with names such as Penguin Point and Despair Rocks – since 2017, and provided a rare opportunity for the ship and survey motor boat James Caird IV to conduct survey activity in the archipelago’s ice filled glacial bays.

The ship was asked to update existing charts of the waters around the island – including Iceberg Bay, where Sunshine Glacier spills into the ocean. Here the mass of ice and rock – continuously moving at around 25 centimeters a day – ends its five-kilometer journey. Enormous chunks of blue and white ice the size of a house, or larger, break off, and bob in the bay.

Protector and her launch James Caird IV – crammed with hi-tech sensors but able to use them in shallower, tighter waters her mothership cannot access – set about surveying the three-kilometer-wide bay, dwarfed in a primeval world of rocks and seracs, huge towers of ice.

“A quick check of the chart showed James Caird IV conducting survey lines north of the glacial terminus as plotted in 2001 – but the boat was most definitively still at sea and hadn’t yet reached the new position of the ice front,” said Lieutenant Michael Wafer. “The actual position of the ice front and towering seracs (pillars of ice) was almost 700 meters north of the 2001 charted position. It’s quite possibly just more demonstrable proof of climate change in action.”

Dr Robert Larter, marine geophysicist at British Antarctic Survey, who has been involved in similar studies on the glaciers around the Antarctic Peninsula, said Protector’s findings mirrored his organisation’s findings: 87 per cent of glaciers in the area have retreated over the past 75 or so years.

“Similar rapid retreat is occurring on many glaciers along the Antarctic Peninsula as a result of rapid regional warming – three times the average global rate – during the second half of the 20th Century,” he explained. “Along much of the western side of the peninsula, glacier retreat is also being driven by incursion onto the continental shelf of warm water from the deep ocean. Loss of ice from Antarctica currently accounts for about 10 per cent of global sea-level rise – and the rate of ice loss has been steadily increasing over the past 30 years.”

Protector is the Royal Navy’s sole icebreaker, dedicated to spending summer in the southern hemisphere in and around the Antarctic peninsula supporting UK and international scientists’ understanding of the frozen continent, its unique environment and wildlife, as well as updating existing maritime charts of the waters to the latest standards.

When the weather rules out work in the polar regions, Protector shifts her activities to warmer water; last autumn she worked extensively off St Helena and Ascension Island – two UK Overseas Territories in the mid-Atlantic. 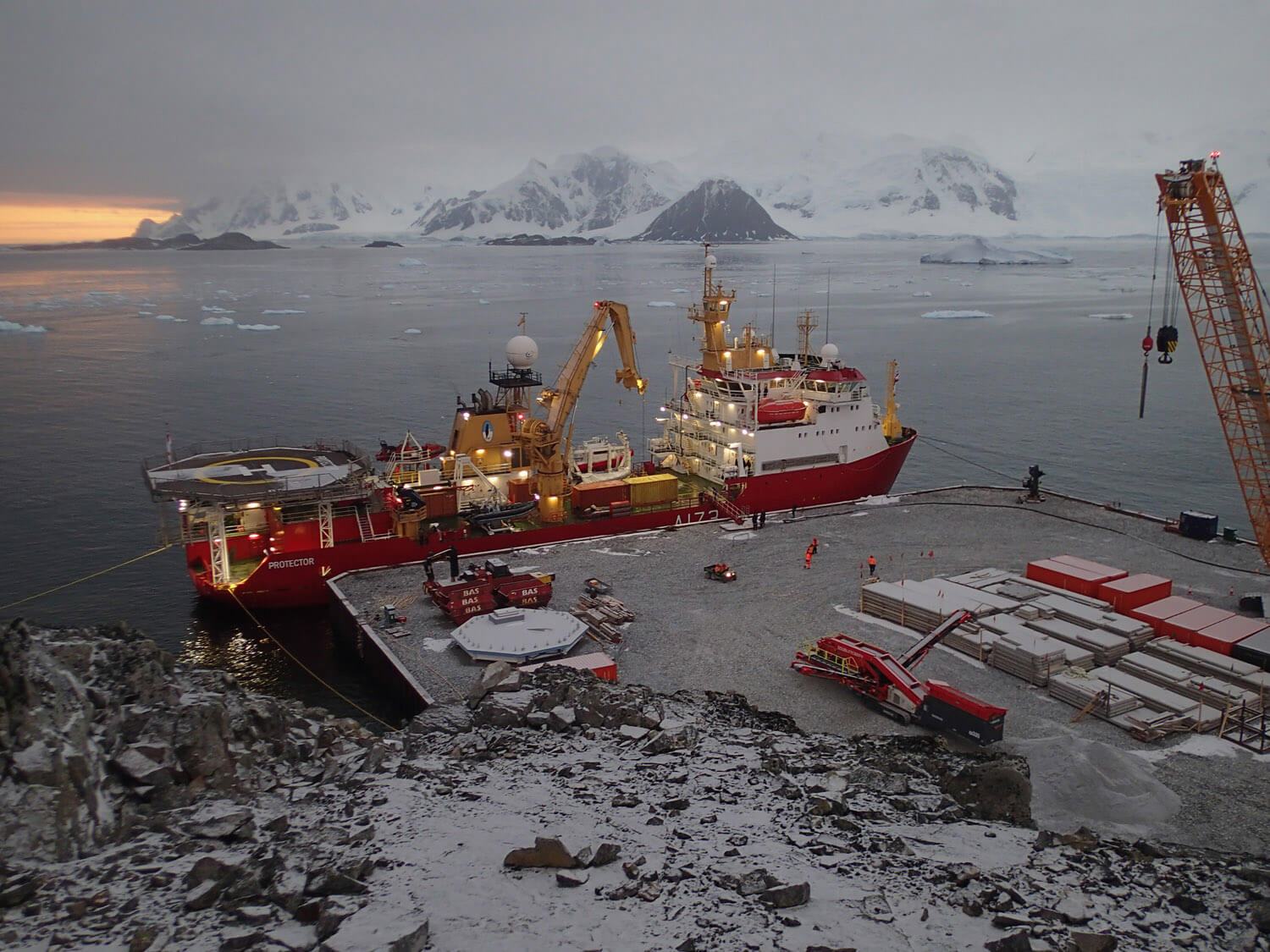 The icebreaker also delivers supplies and personnel to numerous BAS bases and research stations, from South Georgia on the fringe of Antarctica to the main research station at Rothera.

She paid her final visit to Rothera in the dying days of the austral summer, offloading stores and cargo ahead of the arrival of winter when weather conditions prevent ships getting through. Visits to Rothera over the past two years have been few, making this Covid-secure stay even more critical to the year-round work of the station team and scientists there.