The UK’s Royal Navy is scrambling to determine the scope of the mechanical problem aboard its newest aircraft carrier HMS Prince of Wales after an embarrassing incident in which one of the two largest vessels of the fleet was forced to anchor off the south coast of England only hours after she received a grand sendoff on a “landmark mission.” Large crowds gathered on the holiday weekend in the UK to see the carrier off on one of her first missions as she continues to work toward full readiness, but hours later the Royal Navy issued a brief update saying she was anchoring while “investigations into an emerging mechanical issue,” were underway.

The Royal Navy issued a further update on its social media today, Monday, saying, “You might be aware of issues with HMS Prince of Wales since leaving her home port of Portsmouth on Saturday. We are in the process of moving her to a different anchorage which is better suited to allow for further inspection of the ship. Right now our focus is on the ship and our people; everyone is working hard to understand the problem and what can be done next.”

The carrier, which cost nearly $3.5 billion to build is a sister ship to HMS Queen Elizabeth, commissioned in December 2019. In trouble-plagued early operations, the carrier suffered minor flooding in May 2020 followed by a more significant fault in October 2020 that sent her back to the shipyard for major repairs. It is reported that she spent only 20 days at sea in all of 2020 but by October 2021, the Royal Navy declared that she was fully operational and would be fully ready for frontline deployment by 2023.

Serving as a command ship for NATO, HMS Prince of Wales was setting off on a nearly four-month long mission that is scheduled to take her to the United States and then the Caribbean on what the Royal Navy said is a “landmark mission to shape the future of stealth jet and drone operations.” With her task force, they declared HMS Prince of Wales is “ready to push the boundaries of uncrewed technology and the tactics used by the UK’s two new Queen Elizabeth-class carriers.” 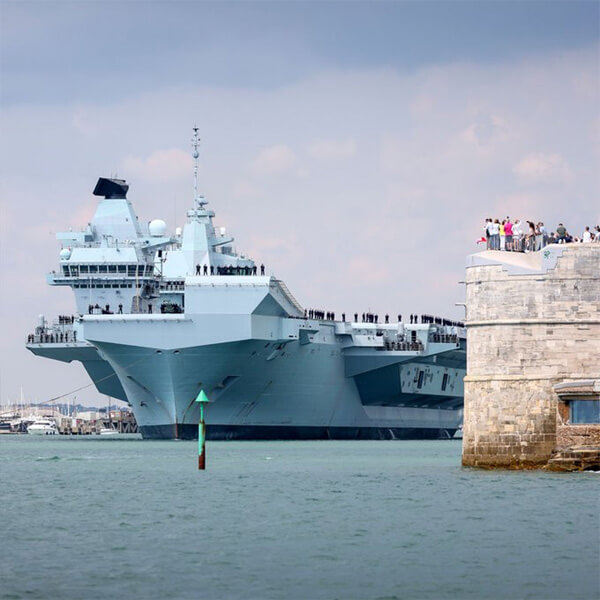 The departure had been scheduled for Friday, but was delayed for 24 hours due to an unspecified “technical issue.” Reports are suggesting that she might be having a problem with her starboard propeller shaft. The Royal Navy has declined to comment but reports suggest that she was being moved to a more sheltered area to facilitate divers carrying out an unspecified underwater inspection.

There was great fanfare as she set off on Saturday at the head of a task force. The 65,000-ton warship is initially deploying alongside frigate HMS Richmond, tanker RFA Tideforce and an air group of helicopters and drones before F-35B stealth fighters were scheduled to join the deployment once the ship arrives in North America. Operating with the Americans, she was to be incorporating the F-35B jets along with uncrewed systems, which they said will “define Royal Navy aviation of the future.”

“Taking the HMS Prince of Wales task group across the Atlantic for the rest of this year will not only push the boundaries of UK carrier operations, but will reinforce our close working relationship with our closest ally,” said Commanding Officer, Captain Richard Hewitt during the sendoff ceremonies. “From operating the F35 Lightnings and drones to hosting the Atlantic Future Forum, none of this would be possible without the efforts of the amazing sailors on board, many of which are on their first deployment with the Royal Navy.”

There are rumors that the 932-foot-long carrier may be forced to enter dry dock for repairs. She was scheduled for the North America exercise while her sister ship HMS Queen Elizabeth is due to deploy in the Mediterranean.