Royal Caribbean International provided the first details on its much anticipated new cruise ship, the Icon of the Seas, which has been under construction in Finland for a year. At 250,800 gross tons, the new cruise ship will be more than five percent larger in volume than the line’s Oasis class, making her the largest cruise ship in the world.

The cruise ship, which is the first of three ordered for the class, is being built at Meyer Turku and scheduled for delivery at the end of 2023. At 1,198 feet in length, the ship is 10 feet longer than the Wonder of the Seas, the current largest cruise ship. The new Icon of the Seas will have 2,805 staterooms giving her a double occupancy of 5,610 passengers which is more than 100 passengers less than the Wonder of the Seas. However, with an increased focus on families, the new ship will have more third and fourth berths giving her a total passenger capacity of 7,800 people. She will have a crew of 2,350. 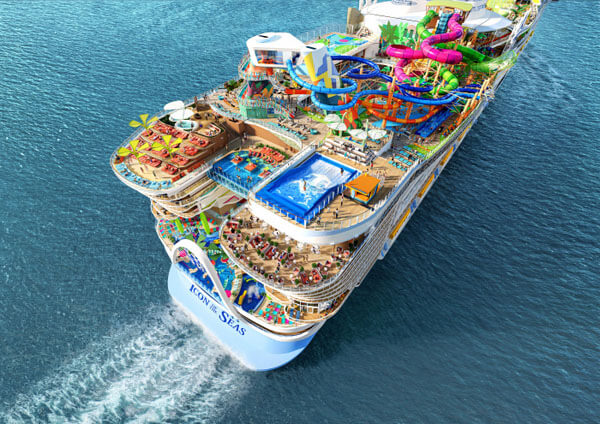 The ship is being marketed as an expansion and advancement of the company’s popular amenities for passengers. It will feature eight different zones called neighborhoods that range from entertainment to sports and recreation and dining. Among the amenities revealed in the first announcement is the largest water park at sea, along with six record-breaking slides, and seven pools. This includes the largest pool at sea, one cantilevered at the top of the superstructure, and a dedicated area for adult passengers.

Accommodations will include an array of family staterooms and the family suite. They are also introducing their largest enclave area for suites along with a dedicated restaurant and lounge.

Passengers will also have a selection from more than 40 dining, bar, and nightlife options. The ship will include both the line’s now well-known promenade of shops, bars, and restaurants, as well as the outdoor Central Park garden with live plants. The Aqua Theater is repositioned from the stern on the Oasis class to a new large glass domed area at the front of the superstructure. The AquaDome will be a tranquil area by day and feature restaurants at night.

"With each new ship, we raise the bar in the travel industry while enhancing what our guests know and love," said Jason Liberty, president and CEO of Royal Caribbean Group. "From the moment they step on board, every experience is specifically designed to give them the best vacation anywhere on land and at sea. With Icon of the Seas, we've taken this to a new level and made the ultimate family vacation."

The debut of the Icon class will also mark firsts and the next step for Royal Caribbean's efforts to enhance the environmental performance of its ships. The Icon of the Seas will be the cruise line's first ship powered by liquefied natural gas (LNG), joining Carnival Corporation, Disney, and MSC among the large cruise lines as well as Havila and Ponant that have built LNG-fueled cruise ships. Royal Caribbean Group is also building an LNG ship for its luxury brand Silversea Cruises. The Icon of the Seas will also be Royal Caribbean’s first with fuel cell technology as well as continuing other technologies including a shore power connection and waste heat recovery systems. 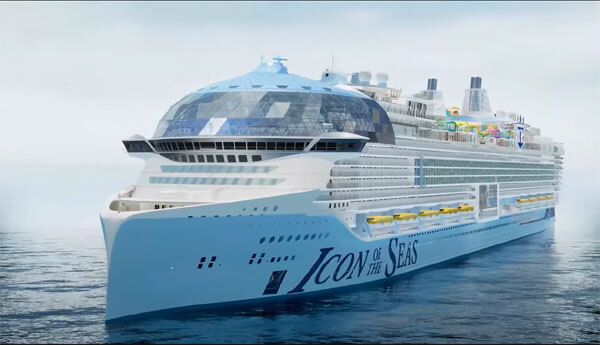 Royal Caribbean placed the order for the new generation of cruise ship in October 2016 with reports the ships would be approximately 200,000 gross tons and accommodate 5,000 passengers. The company ordered a third ship of the class in 2019 before construction had begun on the first ship. The first steel cutting was celebrated in June 2021.

Due to enter service in January 2024, the Icon of the Seas will be sailing from Miami. Sales for the cruises which will alternate between the eastern and western Caribbean will begin next week.