Imagine packing your bags for a 274-night cruise. Royal Caribbean International just announced plans for its first world cruise in the 52-year history of the company, and it is going to be one for the record books. The cruise, which will depart in December 2023, comes as the cruise line continues efforts to ramp up its restart of operations.

Royal Caribbean International’s 90,090 gross ton cruise ship the Serenade of the Seas will be undertaking the company’s first world cruise. Scheduled to sail roundtrip from Miami, Florida on December 10, 2023, the cruise lasting 274-nights will be the longest world cruise undertaken by a cruise ship. With a normal passenger capacity of 2,143 people plus 832 in crew, the Serenade of the Seas will visit all seven continents, with more than 150 destinations in 65 countries.

“This is the world cruise of world cruises,” said Michael Bayley, president and CEO, Royal Caribbean International. “Now more than ever, people have resolved to travel the world and make up for lost time. Royal Caribbean is making that a reality with the ultimate vacation that welcomes those seeking adventure and exploration to taste, dance and dream with us around the world. To travelers asking themselves where they should go next, we say everywhere.”

The previous attempt at the longest world cruise started in August 2019 sailing from Greenwich, England for a planned 245 days aboard the Viking Sun. The cruise was cut short by the pandemic when Viking suspended operations in March 2020 almost two months before the cruise was due to be completed. 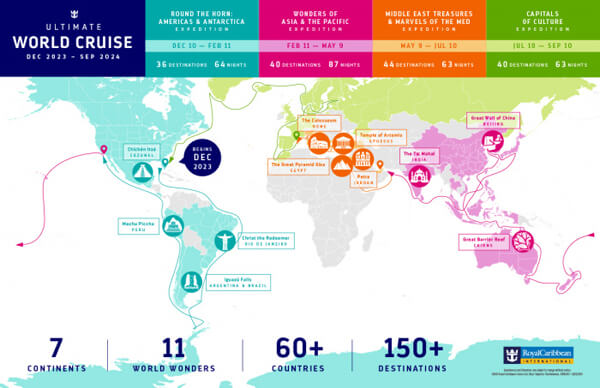 For those that don’t have time to do the full world cruise, Royal Caribbean is offered four segments to the cruise. They include the Americans and Antarctica, Asia and the Pacific, Middle East and the Mediterranean, and Europe with the return to America. Reservations for the world cruise have begun for the company’s repeat passengers and are open to the public next week.

Royal Caribbean is also continuing to restart more of its cruise ships. The line currently has 14 cruise ships sailing with three more due to return to service by December. They, however, were forced to cancel planned cruises in Australia as the country is yet to grant permissions for the industry to resume.

In addition, while not officially confirmed by the cruise line, an independent blog following Royal Caribbean reports that the company has quietly begun to raise its occupancy. The Royal Caribbean Blog cites “anecdotal evidence from passengers that the amount of guests on board is going up from what it was this summer.” The cruise line reportedly was having occupancy between a quarter and a half normal compliment during the summer on its first cruises after the pandemic. Previously, Richard Fain, Chairman and CEO of the parent company Royal Caribbean Group said he expected operations to be back to normal before the end of 2021.