The cruise ship Explorer of the Seas is the latest member of the team assisting in the efforts underway in Florida after a residential high-rise tower collapse. Owners of the cruise ship, Royal Caribbean International, announced that the ship which is currently idled due to the pandemic would provide temporary housing for some of the hundreds of the search and rescue team members working in the town of Surfside, in northern Miami-Dade Country at the site of the collapsed condominium building.

Hundreds of American rescue personnel joined by teams from countries including Mexico and Israel have been working around the clock since a 12-story high-rise condominium building collapsed on June 24. The teams, which are conducting 12-hour shifts and assisted by search and rescue dogs and sophisticated equipment, are picking through the rubble and searching for the more than 150 persons unaccounted for after this disaster.

In collaboration with the Florida Division of Emergency Management (FDEM), Royal Caribbean Group docked its 137,308 gross ton cruise ship the Explorer of the Seas at PortMiami on July 1. According to the cruise line, the Explorer of the Seas will host approximately 600 emergency workers from around the world, providing a respite from their shifts. Search and rescue teams, including their dogs, will arrive in groups of 80 at a time to the ship. Onboard, they will receive individual staterooms, hot meals, laundry service, and WIFI. The cruise ship has a normal passenger capacity of 3,286 people (double occupancy) and operates with a normal complement of 1,185 crew. 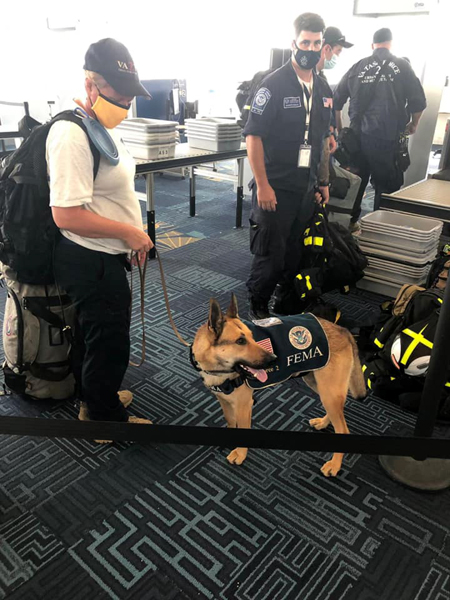 "This incredible act of kindness and generosity from our friends at Royal Caribbean is deeply appreciated by our entire community,” said Miami-Dade Mayor Daniella Levine Cava. “Over the past nine days, our first responders have been working under dangerous, stressful conditions to move our search and rescue mission forward through so many unprecedented challenges. These accommodations will provide them with a much-needed respite and opportunity to rest and recharge for their next shift and are yet another example of how our local and global community has come together in the aftermath of tragedy."

To accomplish this effort, Royal Caribbean said that its team and the ship's leadership worked with the Florida governor's office, Miami-Dade County, FDEM, the U.S. Coast Guard, the U.S. Center for Disease Control and Prevention (CDC), and U.S. Customs and Border Protection. The company acknowledged the support of the various agencies, noting it had received the necessary approvals within 24 hours.

"It's been truly incredible. Our people have worked very hard to get everything organized and coordinated, in just a matter of hours, to be able to house so many workers," said Richard Fain, Royal Caribbean Group's chairman and CEO.

The cruise ship has recently been shuttling between the Bahamas and Florida while it remained out of service since the March 2020 global suspension of cruising. No date had been set for the vessel’s return to commercial service. Under the current plan, the company says the Explorer of the Seas likely will continue to provide housing for the next month. The ship will be docked at Terminal F at PortMiami.