Richard Fain, one of the architects of the modern multi-billion-dollar cruise industry, will be stepping down from his position as Chief Executive Officer of Royal Caribbean Group after 33 years at the helm of the corporation. During his tenure, the company grew from five cruise ships to 60 ships including the world’s largest and annual revenues of nearly $11 billion in revenues before the pandemic induced pause in operations.

Fain, age 74 is also the third-longest serving CEO among current S&P 500 leaders, came to Royal Caribbean in 1988 as part of the second generation of MBAs emerging in the cruise industry taking the reins from the entrepreneurs who had created the modern business two decades earlier. With an MBA from the Wharton School of Business at the University of Pennsylvania, Fain got his start in the cruise industry working for Gotaas-Larsen, one of the original investors in Royal Caribbean, rising through the finance ranks to management and then chairman and CEO of a smaller brand, Royal Admiral Cruises.

The 1988 reorganization of Royal Caribbean that brought in investors the Pritzker family and Israeli shipping magnate Sammy Ofer alongside Norway’s Wilhelmsen family led to Richard Fain’s rise to lead Royal Caribbean. When he took over the company had $400 million in annual revenues and had just introduced its first large cruise ship, the 70,000 gross ton Sovereign of the Seas. Supported by Arne Wilhelmsen who also believed in larger cruise ships and the opportunities in the industry, Fain would oversee the company including the introduction of the 150,000 gross ton Voyager class and the world’s largest cruise ships in the 225,000 gross ton Oasis class. 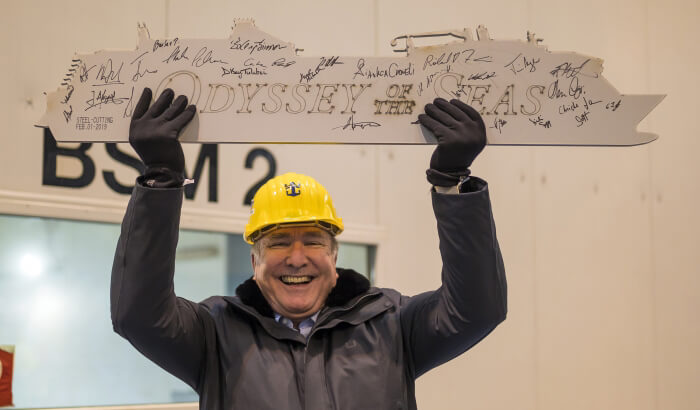 "Richard has been a visionary leader, who has made innumerable and remarkable contributions to our company and our industry," said Bill Kimsey, lead director of the Board. "Most recently, his stewardship during the COVID pandemic marks him as one of the great CEOs of his generation. The cruising community and all of us in the company owe him a debt of gratitude."

Royal Caribbean evolved into a family-oriented cruise brand introducing amenities to attract the emerging market and compete with land-based vacation alternatives. Royal Caribbean would be the first cruise line to introduce a rock climbing wall, surfing, ice skating, bumper cars, zip lines, and many other unique features to cruising. The company has cruise ships with a lawn and others with an open-air park as well as an open-air amphitheater and carousel.

Going public on the New York Stock Exchange, Royal Caribbean also acquired Celebrity Cruises and Silversea Cruises and today is a partner in both TUI Cruises and Hapag-Lloyd Cruises headquartered in Germany. Today, Royal Caribbean Group has over 140,000 berths and its brands have construction contracts for 13 additional cruise ships.

Fain will officially step down as CEO on January 3, 2022, although remaining as chairman of the board. The company said he will continue to also play an active role in new ship construction, including involvement in Royal Caribbean’s new Icon class under construction in Finland and Silverseas’ Project Evolution underway at Meyer Werft in Germany.

"There are no words to express my admiration and appreciation to the people of the Royal Caribbean Group, who have been the real drivers of our success; and my profound appreciation for the support and guidance of the Board of Directors during good times and bad throughout this long period of sustained growth," said Fain announcing his retirement. “Given the great depth and breadth of our leadership and the positive outlook for our business, this is the appropriate time to step aside and have Jason take over."

As part of a succession planning process that has been underway at the corporation, Jason Liberty the current CFO will succeed Fain as CEO. Naftali Holtz, the current senior vice president of finance will become CFO.