Six Rotterdam-based organizations will investigate how sustainably generated electricity, converted into hydrogen, can be used in the production of fuels. TNO, Stedin, Smartport, Uniper, BP Refinery Rotterdam and Port of Rotterdam Authority will investigate the technical and economic feasibility of a power-to-gas plant in the Rotterdam port area, as well as the necessary amendments to regulations.

The parties signed a cooperation agreement on January 18.

The construction of wind farms in the North Sea means that a large amount of green electricity will become available in the coming decades and will be landed via the Tennet grid at Maasvlakte, near Rotterdam, among other places. Using electrolysis, this electricity can split water molecules into oxygen and hydrogen. The hydrogen can be used as a transport fuel or added to the gas grid.

Hydrogen is a gas that is produced and not extracted from the earth, like natural gas or oil. This makes it a virtually inexhaustible source of energy. Only water is emitted during the conversion from hydrogen to energy.

Another advantage of hydrogen is that it can be stored more easily than electricity, which allows peaks in the production of wind and solar energy to be absorbed. In addition, hydrogen is used in industrial processes.

Currently, hydrogen is produced mainly from natural gas, meaning from a fossil source. However, the CO2 can be converted or stored centrally and in the long term it will be possible to produce green hydrogen, from renewable electricity.

The refining of oil and the production of fuels require a lot of energy. Traditionally, fossil energy is used for this. Therefore, the parties will investigate whether it is commercially feasible to build a power to gas unit which can convert sustainably generated electricity into hydrogen and use this in the production process of the BP refinery in Rotterdam.

The project will be unique in its scope, as existing power-to-gas plants, such as the pilot unit operated by Stedin in Rozenburg, have only a fraction of the envisaged capacity.

The research should be completed by mid-2017. 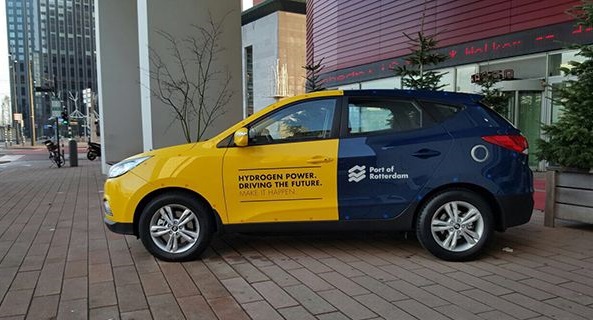 The Port of Rotterdam has already investigated hydrogen technology with its first purchase of a hydrogen car: a Hyundai ix35 Fuel Cell. The car is not a prototype but already for sale at dealerships. It runs like other electric cars and has a range of nearly 600 kilometers. Refueling takes less than three minutes.

The Dutch government is supporting hydrogen, says Jurjen Duintjer, Business Developer Gas and Power at the Port Authority. “In the Fuel Vision that was released last year, a major role is being reserved for hydrogen. Demand is expected to peak around 2030, and it may just become the standard.”

There are two sides to this for the Port of Rotterdam, he says. “We are in a good position to expand production and arrange for transport to the hinterland from there. On the other hand, there are not many filling stations yet, although there are in the port areas. This makes the transport route between the ports an ideal route to test the first generation of these cars,” says Duintjer.