Researchers from Queensland in Australia are restoring coral larvae on damaged areas of the Great Barrier Reef using large inflatable coral nurseries and a robotic LarvalBoat to help disperse them back onto the reef.

Project leader Southern Cross University Professor Peter Harrison and Queensland University of Technology Professor Matthew Dunbabin are distributing the larvae at Moore Reef off Cairns. The project follows the successful trial of the world-first robotic coral delivery system last year and delivery on reefs in the Philippines earlier this year.

Harrison pioneered the coral larval restoration technique (known as coral IVF) which has settled millions of coral babies back onto the reef this week, with coral polyps already starting to grow. 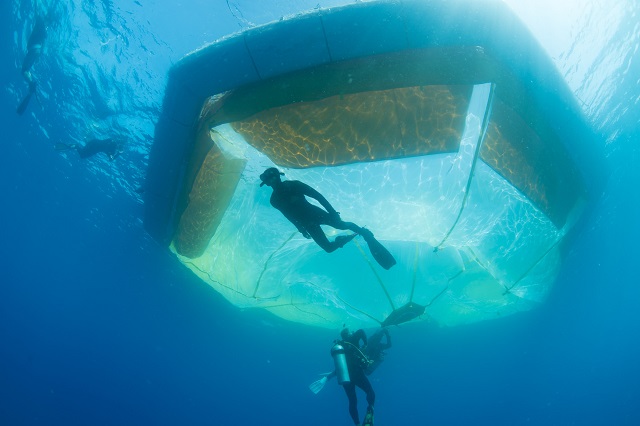 “The larval restoration technique involves capturing spawn from thermally tolerant corals that have survived mass bleaching devastation, and rearing millions of larvae in floating nursery pools so they don’t float away before they are capable of settling on the reef,” Harrison said.

The discovery of mass coral spawning (which occurs at night after the full moon in late spring or early summer) earned Harrison and colleagues a prestigious Eureka Prize for Environmental Research in the 1980s and sparked his idea about how corals could be restored on a mass scale using millions of larvae following a catastrophic bleaching event.

Dunbabin’s robot fleet included two new LarvalBots and, for the first time, an inflatable LarvalBoat which carries a large volume of coral larvae at the water surface for targeted dispersal on the damaged reef areas, thereby increasing the efficiency of the larval supply. “In the year since the first LarvalBot trial, we’ve been able to extend the reach of the robot’s larval delivery system from 500 square metres to a recent trial in the Philippines where a LarvalBot was able to cover an area of three hectares of degraded reef in six hours,” said Dunbabin.

Harrison said the project, funded by the Great Barrier Reef Foundation with support from The Tiffany & Co. Foundation, could “revolutionise coral restoration on reefs worldwide, restoring damaged reef systems and speeding up the recovery of these spectacular ecosystems.”

Aside from being fitted out with a coral delivery system, the original RangerBot can also have a water quality monitoring system attached and can be used to identify and locate the Crown of Thorns starfish.