A week after admitting that Leonard Francis, aka “Fat Leonard,” the Malaysian businessman at the center of the now infamous U.S. Navy bribery scandal had gone missing from home detainment, the U.S. Marshals and Naval Criminal Investigative Service is offering a reward for any information leading to his arrest. According to the “wanted poster,” they are offering up $40,000 for information that helps capture the fugitive.

The poster simply describes Francis as standing 6 feet 2 inches in height. His last weight is recorded at approximately 350 lbs, down from the 400 lbs that earned him the nickname “Fat Leonard” among his co-conspirators that included high-ranking officers in the U.S. Navy’s 7th fleet. The poster also provides a timeline for the discovery that Francis had skipped town leaving home confinement in the San Diego area.

In the highly-publicized case, Francis had pleaded guilty to providing at least $500,000 in bribes to individuals in the U.S. Navy for information and helping to direct business to his company. He was arrested in 2013 and pleaded guilty two years later. Francis, who had been cooperating with prosecutors was living in a home while undergoing medical treatment and awaiting sentencing, which after several postponements, was set for September 22. 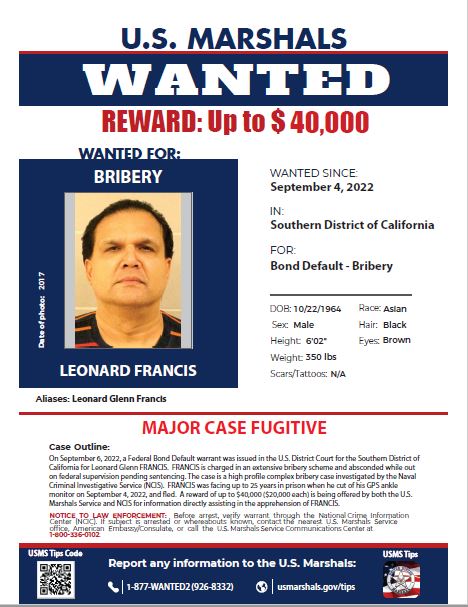 Francis is officially wanted for bond default in a bribery case. The charge is a fugitive in a major case. Saying that “his current whereabouts are unknown,” the U.S. Marshall Service reports that no less than 10 agencies are now involved in the search. The U.S. has also issued an international bulletin for Francis. The hope is that international authorities would detain and extradite Francis with one focus being on Singapore where he worked or Malaysia where he is originally from. Both countries have extradition agreements with the U.S.

Before leaving confinement, Francis was wearing a tracking device commonly known as an “ankle bracelet.” The authorities received a signal around 7:30 a.m. on September 4 showing that the device had been tampered with but failed to immediately proceed to the house. They attempted to contact Francis and spoke with his defense attorney. The San Diego Police Department made a welfare check at the house around 2:40 p.m. reporting that it appeared that no one was home. It was not until 4:00 p.m. that the San Diego Fugitive Task Force entered the residence. They found the monitoring device had been cut off and the home was empty.

Subsequent interviews with neighbors revealed that rental trucks had been seen at the home in the days leading up to the disappearance.