A new design project is addressing the challenge of taking an in-service Newcastlemax bulker and making it compliant with the IMO’s new emissions initiatives. With the EEXI and CII coming into force this year, the project looks at a vessel that they believe would receive a “D” ranking and be considered non-compliant and retrofitting the vessel with solar panels, batteries, and rigid sails along with weather routing and management software to improve its rating to a “C” and maintain compliance at least through 2026.

The challenge is being undertaken by a partnership consisting of the vessel operator and shipping agency the Nepa Group of the Netherlands along with naval design group Aurelia and Aloft Systems to address the needs of a 203,000 dwt bulk carrier. They were seeking a solution for the vessel to comply with the CII index based on five annual sailings between Brazil and China.

The vessel used for the study is 984 feet long with a beam of 164 feet. The vessel has a steaming range of 24,500 nautical miles powered by a 17MW main engine and two generators each capable of  60 kW. They report the vessel would consume 16,223 tons of conventional HFO fuel and 1,120 tons of marine gas oil (MGO) each year.

With a budget of $10 million, they designed a retrofit package to take a vessel currently with a “D” rating and bring it into compliance. Aurelia’s design consists of a two-phase approach to retrofitting the vessel. By following this approach, they report the bulker would achieve the required emission reductions to maintain a passing “C” rating. 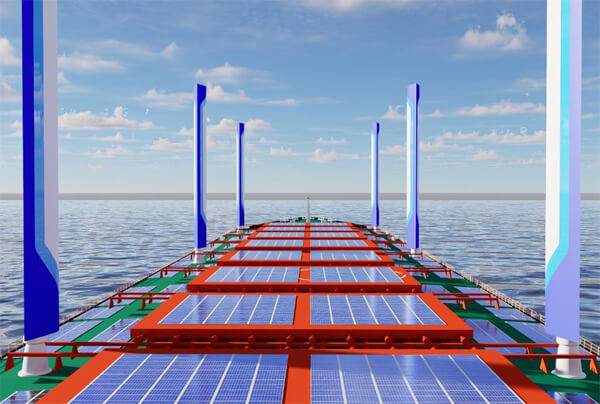 In the first phase, which would be undertaken in 2023, the vessel is retrofitted with solar panels, batteries, and management software. The solar panels are installed on free deck space including the tops of the cargo hatches and would have a peak power of 1 MWh. According to the company, this would provide enough power for the hotel load during daylight sailing with the surplus power used to recharge the batteries which maintain the hotel load at night. A full charge for the battery pack would require approximately 12 hours and the 660 batteries would provide a 12-hour output of about 550 kW.

By the beginning of 2025, the second retrofit would be required to meet the increasing levels of the regulations. This would consist of the installation of six rigid sails standing approximately 100 feet off the deck. The rendering shows the sails placed between or aside the hatches to reduce shadows on the solar panels. The vessel would also switch to biofuels. Emissions would be reduced by a further 10 percent while fuel costs would be lowered by 16 percent.

According to the partners, the approach demonstrates how to combine innovative solutions and smart decisions for faster decarbonization of the shipping industry. By taking an innovative approach combining currently available technologies, they were able to achieve the goals of reducing emissions while keeping the Newcastlemax in service and productive for its owner. 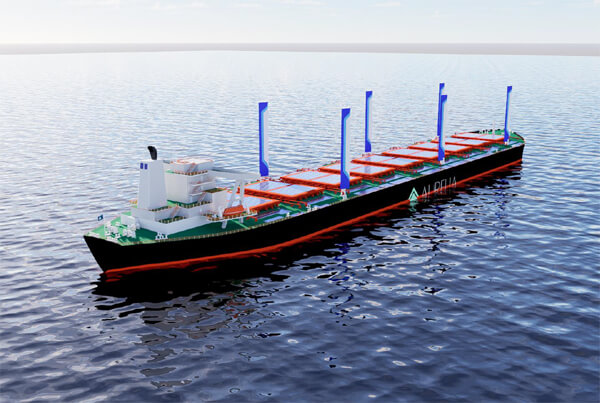