Zim Integrated has emerged as the top performing carrier in the 2019 container shipping Schedule Reliability Report published by eeSea, with the Dominican Republic’s Port of Rio Haina topping the rankings for port reliability performance.

Overall, global liner schedule on-time performance ended the year at 43 percent reliability in December, down from the full year average of 47 percent. This corresponded to 1.6 days delay on average across 2019.

In the world of container alliances, 2M topped the table at 56 percent of services on time across 2019, but dropped to 44 percent in December, below Ocean Alliance.

Copenhagen-based eeSea's 2019 Schedule Reliability Report is based on over 400,000 data points, currently reporting on the three major East/West trade routes and all underlying container lines and ports.

The report finds that Zim Integrated was the best performing global carrier in 2019, with 65 percent of all their vessels arriving on time, followed by Evergreen at 58 percent and Maersk Line at 57 percent. Meanwhile, Hapag-Lloyd, Wan Hai and ONE occupied the last three spots, with ONE posting an on-time percentage of just 27 percent.

Of the regional carriers, Independent Container Lines, with their TA1 service, had a 93 percent on-time percentage over 2019.

A vessel is deemed to be on-time if a vessel reaches port within eight hours of their standard proforma arrival.

The results are based on a total of 140,000 matched port arrival and departure events in 2019, across more than 130 services on the three main East-West liner trades. Some 12,000 events are being added each month, and trade scope will increase in 2020 to incorporate Middle East, Oceania and South America trades. 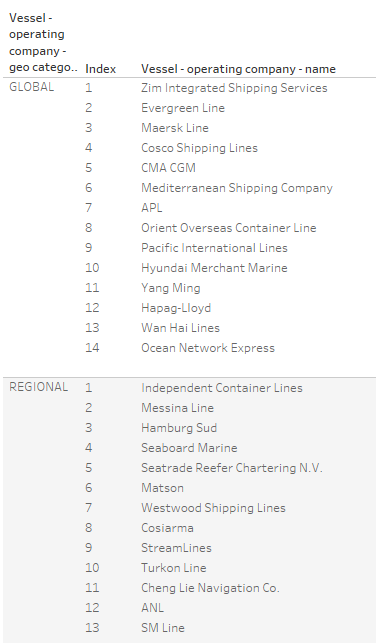 eeSea has also examined the reliability performance of over 150 global liner ports. Top was the Dominican Republic’s Port of Rio Haina, with 92 percent of all arrivals and departures at their scheduled time. The United Kingdom’s Tilbury Port and Slovenia’s Port of Koper topped the rankings for their respective regions, at 90 percent and 86 percent of services departing on time respectively.

Meanwhile, 2019 was a bad year for North American liner shipping, with both the East and West Coasts nearly level as the lowest performing regions, at 36 percent and 35 percent reliability.

The eeSea Liner Schedule Reliability Report is supported by the eeSea data platform which provides users with the datasets that sit behind their ranking, enabling them to more accurately assess and improve their performance. The eeSea platform can also be used to benefit and smooth business between the parties.