A bulk carrier traveling through the Caribbean came across a small boat packed with individuals that appeared to be in distress. The vessel rescued the people and brought them to the island of Grand Cayman, but that’s where the situation took an odd turn and now the vessel finds itself caught in a standoff between the refugees and the government of Grand Cayman.

The 52,454 dwt Bulk Freedom, registered in Panama, was sailing from the United States to Panama on April 4 when it encountered the small boat approximately 50 nautical miles off Grand Cayman. The vessel took aboard the dozen adults and two children who according to reports from the Cayman Customs and Border Control Service appeared to be weak after having drifted for the past few days. The refugees however were uninjured from their time at sea in the small boat.

The Bulk Freedom reported the situation to the Cayman Island Coast Guard and proceeded to the anchorage off George Town, Grand Cayman where it was assured the people would be transferred to shore. However, that’s there the situation took the odd turn.

The dozen individuals turned out to be Cuban citizens who had been on Grand Cayman treated as refugees. While they were not being detained on the island, they were being monitored with electronic bracelets. At least one of the couples had been in a legal dispute with the government seeking to have their marriage rights recognized. The woman is native to the Dominican Republic and has an infant child with a Cuban man.

The group told authorities that they had legal hired the boat from Grand Cayman and set out to sea, but it was unclear if they had a specific destination. The Cayman authorities reported the Cubans missing on April 4 after their electronic monitoring devices failed to respond. 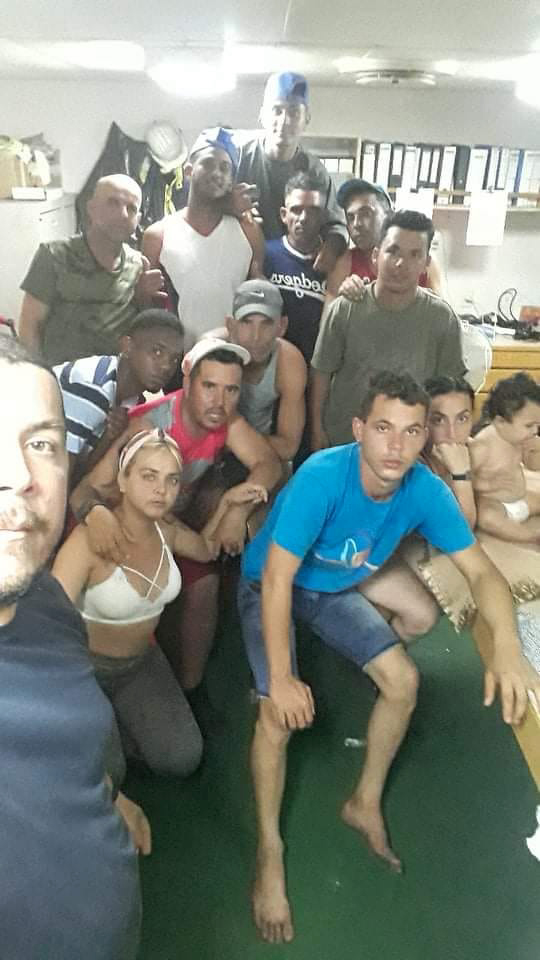 After the Bulk Freedom anchored in Grand Cayman, the vessel was met by a Cayman Islands Coast Guard vessel along with police and Customs and Border officers. The Cubans announced to the officers that they did not want to return to Grand Cayman and that they wanted to stay aboard the bulk carrier to travel either to the United States or Central America where they would seek asylum. Cayman authorities have been trying to persuade the refugees that the bulk carrier is not heading in that direction and is not prepared to transport them.

At the moment, there continues to be a standoff with the individuals reporting they are now locked aboard the ship running low on supplies. The refugees have been posting on social media accounts with videos and photos and asking for supplies including water and food. Their pictures show them sleeping on the deck and floor in the vessel's communications office, overcrowded and without proper facilities.

The Cayman News Service reported that one person agreed to return to the island and was transported ashore and placed into a quarantine hotel. A second member of the group may have later also gone ashore after reporting that they were not feeling well.

At least 10 Cubans adults and two infants remain aboard the Bulk Freedom with the vessel finding itself caught in the ongoing standoff.