While global reports have indicated a strong overall decline in attacks and incidents against crews and their ships in 2021, cases of sea robberies, which in some cases are violent, persist in the Singapore Strait. While most of the cases involve the theft of spare parts and small equipment, in two recent cases the perpetrators were armed and one crew member was assaulted.

The ReCAAP Information Sharing Centre based in Singapore issued a repeated warning to ships to maintain their guard while transiting the region as all the recent reports were for vessels underway at the time. They are also calling for more enforcement by the states in the region and urgent reporting of incidents. 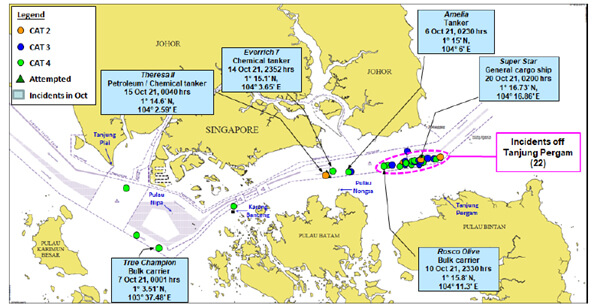 The most recent boarding took place yesterday, October 20, when a Panama registered general cargo ship was underway in the Straits of Malacca and Singapore. The report was disturbing to ReCAAP because the crew of the Super Star reported that they saw five individuals in the engine room with two of them armed with guns. The alarm was raised on the ship and the intruders fled. The crew later reported that nothing had been stolen.

Five days earlier also in the same area, the chemical tanker Theresa II, registered in Singapore, reported that a duty oiler spotted seven or eight perpetrators armed with knives in the engine room workshop. The perpetrators tied up the oiler while they stole spare engine parts. As they were leaving the ship, they untied the oiler.

Two other incidents in the span of a week in October also involved intruders being seen in the engine room of vessels while they were underway in the Singapore Strait. However, in both of those cases, the boarders left the ship when the alarm was raised and in both cases no weapons were reported. The crews of the ships reported that nothing was missing.  In a third case, however, the crew of a bulk carrier discovered that some spare engine parts were missing but did not see any unauthorized individuals aboard the ships.

While armed robbery has been on the increase in the region in 2021, ReCAAP was able to report that there have been no incidents of abduction of crew reported since January 2020. Further, they believe that no crew is currently being held in captivity. “The threat of the abduction of crew in the Sulu-Celebes Seas and waters off Eastern Sabah remains high particularly in the areas of Sulu and nearby waters off Tawi-Tawi,” ReCAAP writes in its weekly report. They warned that at least one of the Abu Sayyaf Group which has conducted the abductions in the past escaped during the last raid of the region in April by the Philippine Armed Forces.