Queen Victoria Cruises into Drydock With Passengers Aboard

The approximately 2,000 passengers aboard Cunard Line’s cruise ship Queen Victoria (90,746 gross tons) had a rather unique port of call added to their 15-night Canary Island Celebration cruise during the Christmas-New Years holidays. The cruise line announced to them that the ship would be making a visit to dry dock during their cruise for “essential maintenance.”

When the passengers boarded their cruise on December 23 in Southampton, England they were advised of the change in itinerary. They proceeded as planned to Lanzarote, Fuerteventura, La Palma, Tenerife, and finally Madeira for the spectacular New Years' fireworks display. The cruise was then scheduled to proceed to Cadiz, Spain where they were told the ship would be diverting to the Navantia Shipyard for the repairs and that the planned call in Lisbon would be canceled.

The cruise arrived at Navantia on January 2 and the ship backed stern first into the drydock at mid-day with all of her passengers along with approximately 900 crewmembers. The captain advised that it would take approximately three hours to lower the ship onto the blocks and another two hours before the ship was secured and a gangway placed to permit shore visits. Because it is an active industrial area, their movements however were limited and required to take shuttle buses to the port gate.

Passengers awakened this morning to see that all the water had been drained from the dry dock and work was underway on the cruise ship’s Azipods. Reports indicated an unspecified problem with a blade on one of the propellers that required repairs. On social media passengers mentioned unusually loud noises in the stern of the ship during the cruise while some said there had been increased vibration on cruises over the last few months.

With a typically British sense of humor, Captain Tomas Connery wrote to passengers in his letter providing important information on the Cadiz dry dock, “We thank you for your understanding as we carry out this essential piece of maintenance and hope that you thoroughly enjoy this once in a lifetime opportunity for most guests to admire Queen Victoria out of water.”

Navantia cited the unique challenge of an express repair for the large cruise ship saying that they had been working to carefully plan the repairs. Crews are working around the clock on the ship.

The plan calls for all guests to be aboard tomorrow morning, January 4 as the gangway is removed by 9:00 a.m. Shortly after Navantia will start to flood the dry dock. Somewhere between noon and 2:00 p.m. the cruise ship is scheduled to leave the dock and start its return voyage to Southampton and the end of the cruise.

The repair was critical as the Queen Victoria is scheduled after England to make a quick run to Hamburg, Germany to board passengers. The official start for Cunard Centenary World Cruise is from Southampton on January 11 with the cruise ship scheduled for a 101-night world cruise.

Passengers have been posting messages on social media showing their unique experience. Local TV footage shows passengers at the rail watching the repairs or on deck enjoying cruise activities while the ship is high and dry. While unusual it is not the first cruise ship to make a dry dock call with passengers aboard. Navantia conducted express repairs to the AIDABella in 2017. The ship was in the dry dock for 30 hours to repair a small oil leak from its Azipod. Costa Cruises also dry docked one of its cruise ships a few years ago at Marseille permitting passengers to remain aboard during the repairs. 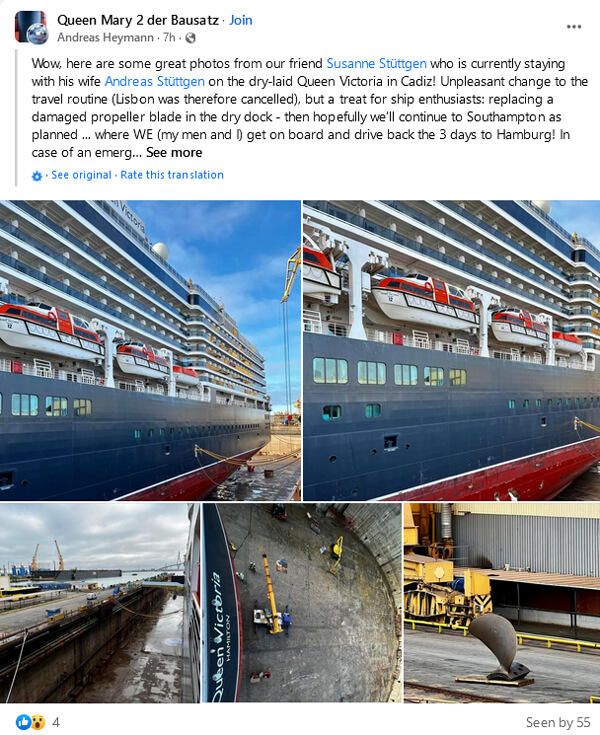