The Carnival Corporation brand announced the details for the new cruise ship as sales begin for its maiden voyage. It will be 175,500 gross tons, larger than the 169,000 gross ton Seaside Evo class which Fincantieri is currently completing for MSC Cruises. Fincantieri started construction on its first LNG-fueled cruise ship in June for TUI Cruises as well as the Princess cruise ship which is now under construction. The shipbuilder is following Meyer Werft which built the first cruise ship to operate full-time on LNG in 2018 and Chantiers de l’Atlantique which is currently completing two LNG-fueled cruise ships for MSC.

Princess ordered the next generation vessel along with a sister ship in June 2019 from Fincantieri which has been the builder for most of Princess’s cruise ships. It is the second LNG class for Carnival which was using the Meyer design as the basis for its first nine LNG-fueled cruise ships. Those ships are being operated by AIDA, Costa, P&O UK, and Carnival Cruise Line. The Sun Princess due to enter service in early 2024 becomes the tenth LNG cruise ship for Carnival Corp. and will be followed by a sister ship in the spring of 2025. 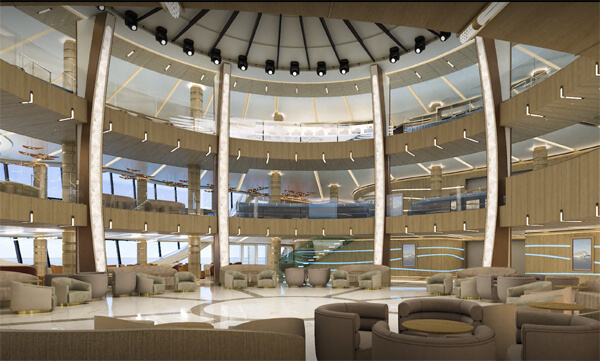 In addition to being Princess’s largest cruise ship, the new ship will introduce a combination of new features with some of the cruise line’s historical amenities. The design has also been adapted to incorporate concepts that Fincantieri has been developing in the past few years featuring more glass to provide the ships with better ocean views and daylight. The three-story Piazza found on all Princess’s current cruise ships will add more glass to increase the passengers’ sense of the sea.

Among the new elements is a large glass dome at the top of the ship which by day features an indoor-outdoor pool. The cruise line says the space is inspired by the terraces of Santorini. At night, the pool will be covered by a stage and the space transforms into an entertainment venue. The new ship will also expand the use of the cruise line’s locator technology called Medallion Class. It provides passengers with access to the ship’s technology and is used to personalize service during a cruise. 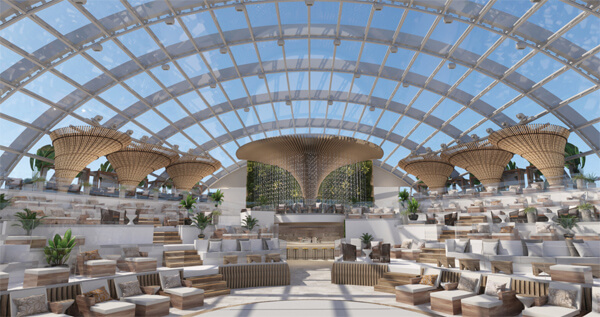 The Sun Princess will feature 2,157 total staterooms, including 50 suites and 100 connecting rooms, with more outdoor balcony space. It will also be the line’s first cruise ship to have a suite enclave with a dedicated restaurant, lounge, and sun deck. Passenger capacity for the 1,133-foot-long ship will be 4,300.

She is the third cruise ship for Princess Cruises to bear the name Sun Princess. The first came to the company in 1974 when they were acquired by P&O and sailed with the company till 1988. The second was part of a new class of Fincantieri-built cruise ships introduced in 1995 and sold by Carnival Corporation in 2020 as part of the program to accelerate the departure of smaller and older ships from the corporate fleet during the pause in operations during the pandemic. Princess currently has a fleet of 15 cruise ships.