Princess Cruises has its most robust 2021 World Cruise itinerary ever with more ports and countries than ever before - what it says is the most destination-rich world cruise ever offered.

The Island Princess will sail over 34,000 nautical miles on the voyage and cross the equator two times. The itinerary includes visits to 25 UNESCO World Heritage Sites, including the Great Barrier Reef in Australia, the Archaeological City of Petra from Aqaba, the ancient Greek city of Ephesus in Turkey and the historical city of Rabat from Casablanca. There will be maiden port calls to the seaside town of Gynthion, Greece; New Plymouth, New Zealand; and Mindelo, Cape Verde Islands. 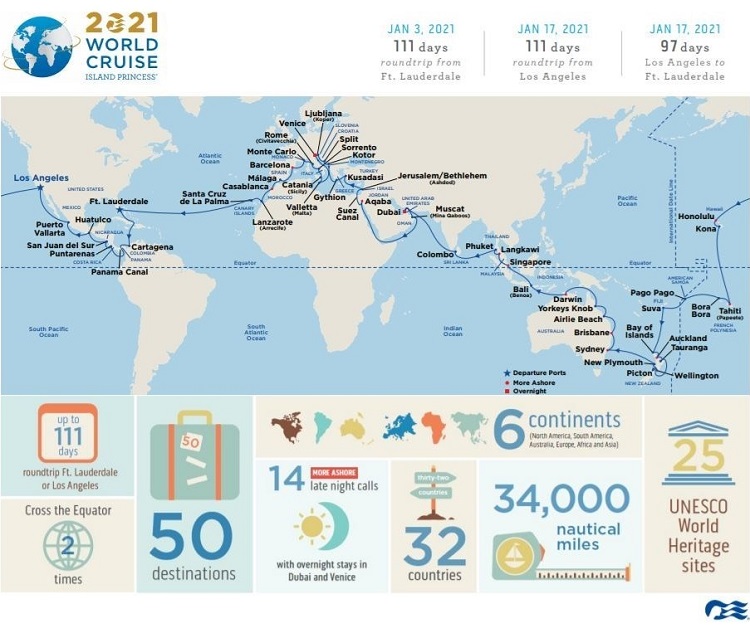 Princess Cruises operates a fleet of 17 cruise ships, carrying two million guests each year to 380 destinations including the Caribbean, Alaska, Panama Canal, Mexican Riviera, Europe, South America, Australia/New Zealand, the South Pacific, Hawaii, Asia, Canada/New England and Antarctica. Three new Royal-class ships are currently on order with the next new ship under construction, Sky Princess, scheduled for delivery in October 2019, followed by Enchanted Princess in June 2020. Princess has announced two new LNG-fueled ships which will be the largest ships in the Princess fleet, accommodating approximately 4,300 guests are planned for delivery in 2023 and 2025. Princess now has five ships arriving over the next six years between 2019 and 2025.