The Port of Duisburg is partnering with Rolls-Royce's Power Systems division to build a hydrogen fuel cell system to supply electrical power at peak load, as well as hydrogen-powered combined heat and power-generation station. The port is working with its partners to build out a hydrogen supply network, including energy conversion and storage systems, over the next two years.

Duisburg is already Europe's largest inland port, and it is currently transforming a coal transshipment terminal into a new inland container terminal. This climate-friendly transformation will incorporate power supplied by fuel cells and hydrogen-fueled engines.

The Rolls Royce mtu fuel cell system will supply electrical power to add onto available grid capacity at times of peak load - for example, when there are lots of vessels cold-ironing at berth.

In addition, a set of two hydrogen-powered, internal combustion engine generator sets - adapted from mtu's natural-gas-fired Series 4000 powerplants - will provide a boost to the container terminal's electrical network. The waste heat from the generators' exhaust will be used for process heat or for heating buildings around the port complex. The operator also plans to integrate solar panels and battery storage systems into the terminal's grid. 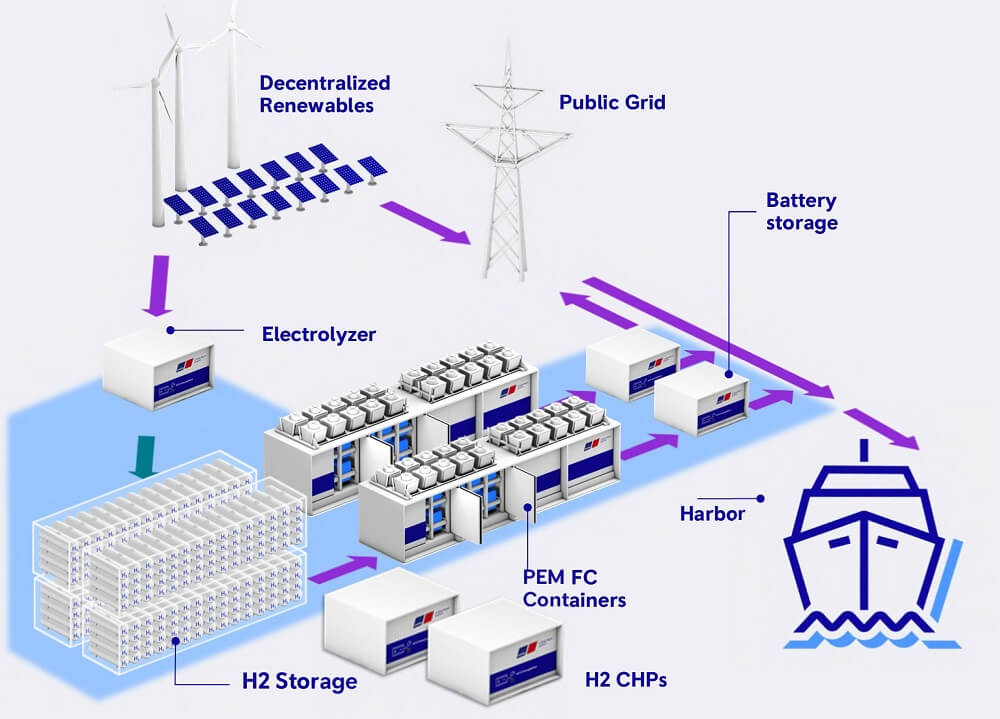 The project is supported by Duisberg's local government, researchers at Fraunhofer Institute Umsicht, regional utility networks and the German federal government. It will have four years of ongoing financial support from the Ministry for Economic Affairs and Energy.

The terminal itself is being developed in partnership with Cosco Shipping Logistics, Swiss intermodal transport company Hupac SA, and inland barge line HTS Group. One of its primary functions will be to provide intermodal transfers for rail-based trade from China. Duisburg is the European terminus for 30 percent of New Silk Road rail traffic, connecting the EU with cities in central and eastern China, and the new terminal could increase the number of container-carrying unit trains it handles to 100 trains per week.

In an ambitious effort to reduce its total carbon footprint, the port plans to handle 40 percent of its container traffic by inland barge and another 40 percent by rail - reducing the share of less-efficient truck drayage to just 20 percent. It may also add hydrogen-fueled shunting locomotives for its rail yard.