[Update: A bystander video released Monday appears to corroborate the evidence in these photos, and it has been added below.]

The first images believed to be of the damaged cruiser Moskva began circulating on social media on Sunday, and open-source intelligence analysts suggest that the photos appear to be authentic. They match closely with previous images of Moskva, and the details of the scene align closely with one of the two competing accounts of the vessel's demise.

Moskva was the flagship of the Black Sea Fleet, and she was the largest surface combatant lost in action since the end of the Second World War. The Russian Navy has released very little information about the circumstances of her sinking. According to official accounts carried by Russian state media, the Moskva was badly damaged by an accidental fire and a magazine explosion, and later went down in rough weather while under tow. No official casualty numbers have been released.

First ever footage of the Russian ship Moskva before it sank pic.twitter.com/YOYrmMz8MC

The government of Ukraine has claimed that it hit the Moskva with two domestically-produced Neptune anti-ship missiles from a coastal defense battery. The Pentagon has confirmed Ukraine's account of the casualty.

If verified, the photos appear consistent with an anti-ship missile strike, according to independent open-source analysts. The most detailed image (top) appears to show two holes amidships at the waterline, just below the stacks on the port side. Significant fire damage is visible abovedecks, and the ship has clearly settled from flooding, with a pronounced list to port. Black smoke marks at multiple hull penetrations near the main deck level are consistent with an internal fire running aft of the site of impact, according to analysts.

According to analyst H.I. Sutton and others, the two streams of water seen behind the cruiser may be from the monitors of a firefighting tug, which may be hidden from view by the Moskva's hangar structure aft. The tug's mast is just visible to the right of the radome on the top of the hangar.

All the aft port side lifeboats appear to have been deployed. pic.twitter.com/cTcmfhbxl5

The weather and surface conditions appear to be mild, contrary to official Russian accounts of the loss, and the cruiser does not appear to be making way under tow. Her life rafts are missing, suggesting an evacuation had already been conducted at the time the images were taken. 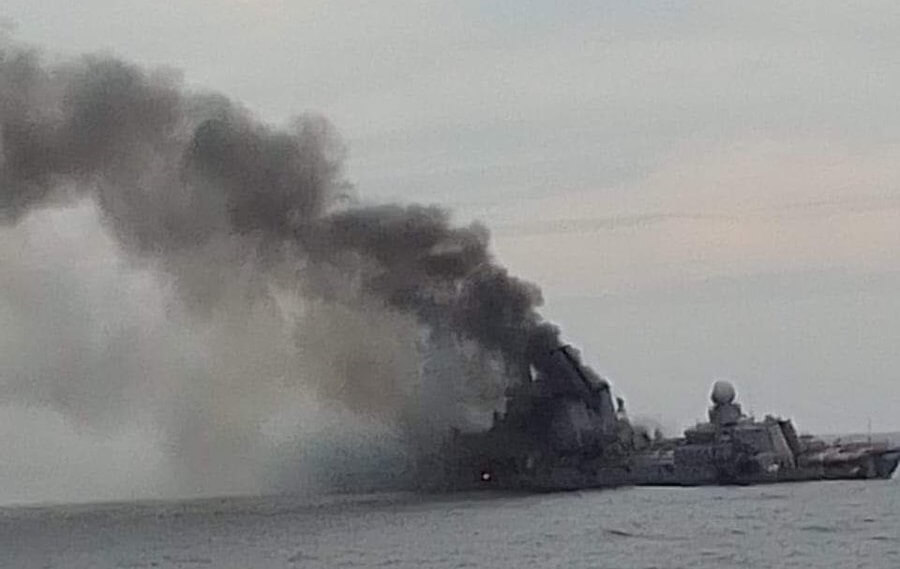 After the attack (Source unknown) 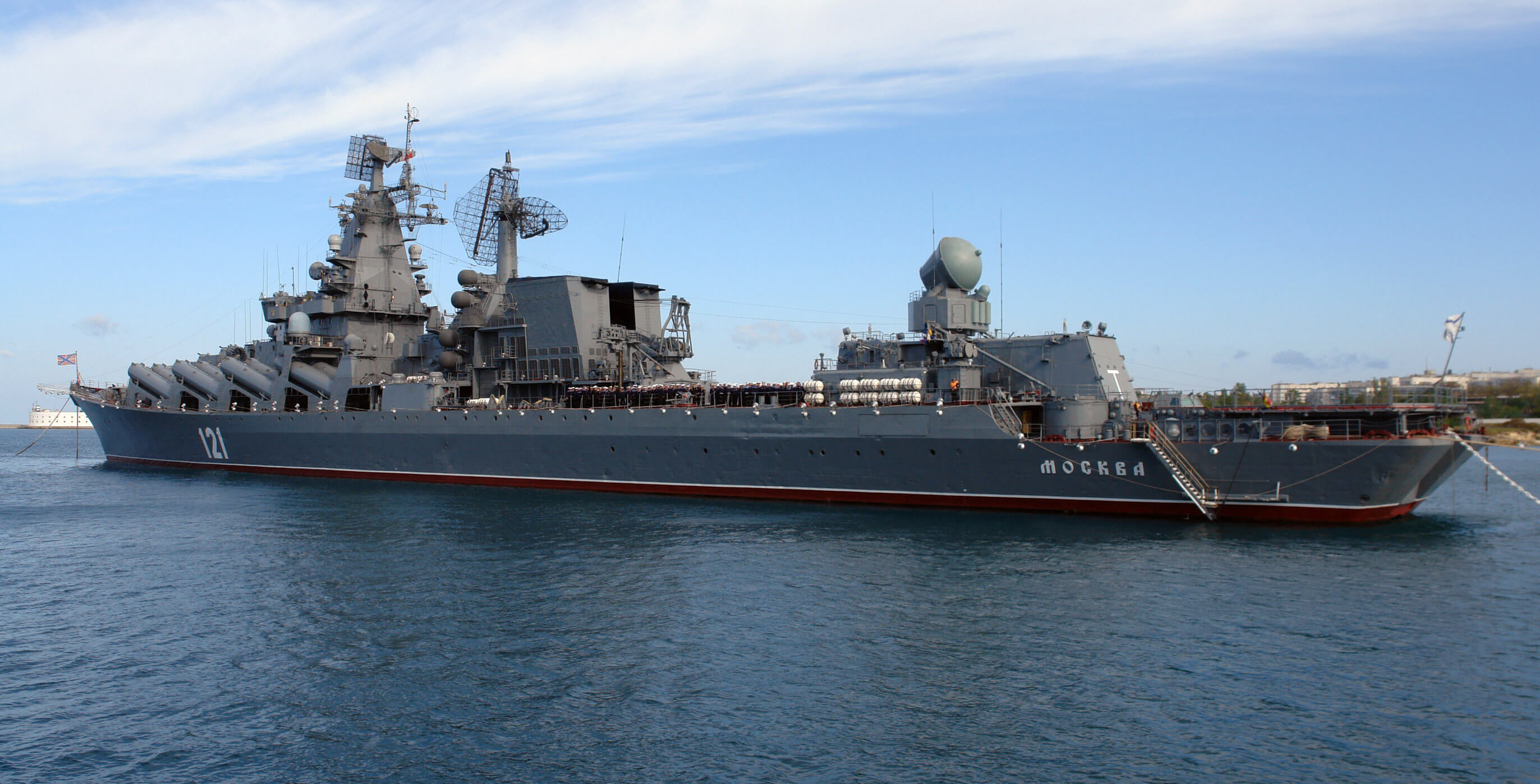 Moskva's port side before the attack (Russian Navy file photo)

While the attack raises questions about the viability of Soviet-era air defense systems like those aboard Moskva, multiple naval analysts say that regardless of initial cause, the vessel's ultimate sinking may reflect the preparedness of Russian Navy crews to respond to damage control scenarios. In recent decades, U.S. Navy sailors have saved several warships that suffered similar hull damage (or potentially worse), including the USS Cole, USS Stark, USS Samuel B. Roberts, USS Fitzgerald and USS John S. McCain.

The extent of the casualties sustained aboard Moskva is not publicly known, and the Russian government has yet to release figures. However, anecdotal information suggests that the losses were not trivial.

The ship had a crew complement of 510, but a recognition ceremony held (reportedly) after the vessel's loss showed a far smaller group, with analyst estimates falling in the range of 100-250 personnel present. The video was produced by Russian state media, and its legitimacy has not been verified.

The Russian Defense Ministry published a video, which, according to the ministry, shows the meeting of Admiral Nikolai Yevmenov, Commander-in-Chief of the #Russian Navy, with the crew of the cruiser "Moskva" in #Sevastopol. pic.twitter.com/2sBeEiXEvB

Separately, Russian language outlet Novaya Gazeta reported on a conversation with the mother of a crewmember who survived the attack. The mother relayed a story of heavy damage and loss of life, including an estimated 40 dead, a large number of severely wounded crewmembers and many more missing.

In addition, U.S.-funded publication Radio Liberty contacted the wife of a deceased crewmember, electrician Ivan Vakhrushev. She confirmed his death and said that an estimated 27 crewmembers were listed as missing.

The commander of the Black Sea Fleet, Adm. Igor Osipov, was detained by Russian state security services after the sinking, according to Ukrainian intelligence.