Reports from Mauritius indicate that the efforts to control oil leaking from the grounded bulk carrier Wakashio have for the moment been successful while frantic efforts continue along the coastline to contain the oil and control the spreading environmental disaster. With the situation remaining precarious, the prime minister of Mauritius, however, has warned his county to prepare for the worst-case scenario. The spill is already being called the worst in Mauritius’ history.

According to a statement from prime minister Pravind Jugnauth’s office, the flow of oil from the ship’s ruptured starboard tanks has been stopped for the moment. The estimates are that between 1,000 and 2,000 tons of fuel however have already leaked from the ship into the environmentally sensitive waters. At the time of the grounding on July 25, the 200,000 DWT bulk carrier was reported to have approximately 3,800 tons of fuel oil, 200 tons of diesel, and 90 tons of lube oil on board.

The first signs of cracks in the hull were reported on August 5 and shortly thereafter oil began to appear in the waters. The ship’s owners, Nagashiki Shipping Company, reported that it had contracted a professional response organization and salvage team and working with teams from Mauritius and international experts a hose connection was established between the Wakashio and a tanker the MT Elise. A second tanker the MT Tresta Star is also standing by the scene while helicopters have been deployed to transfer containers of fuel oil that was being pumped into drums on deck.

Despite the progress, the prime minister warned that the experts have reported additional cracks forming in the bulk carrier’s hull. With the weather in the area deteriorating and high seas again expected, the prime minister said they fear it is only a matter of time until the Wakashio breaks apart putting in danger at least two additional fuel tanks that so far are believed to be intact. They are estimating that as much as 2,000 additional tons of oil remain in the ship’s tanks.

In a further attempt to stabilize the situation, the ship’s owner in their official statement said that a tow line has been secured between the Wakashio and one of the salvage tugs that is on the scene. They are hoping that the tug can help to secure the Wakashio. 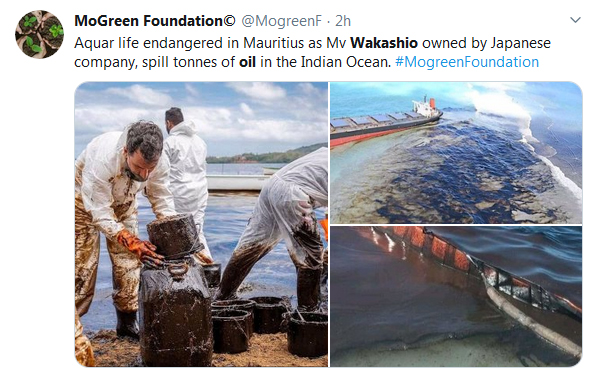 Aid also continues to arrive in Mauritius both from international sources, environmental groups, and residents who flocked to the shoreline trying to clean up the oil. France’s defense minister told Reuters that his country was sending both a military plane and a ship to Mauritius. The ship’s owner also said that they were seeking permission from Mauritius to deploy oil dispersant chemicals on the water.

Speaking in Japan, Nagashiki Shipping said it, “deeply apologizes to the people of Mauritius and will do its utmost to protect the environment and mitigate the effects of the pollution.” Similarly the vessel's charter, Japan's Mitsui O.S.K. Line said at a news conference Saturday, “We apologize profusely and deeply for the great trouble we have caused.”

Accusations are also being to circulate to the cause to the grounding with a broad range of environmental groups and residents harshly criticizing the response efforts in the days after the grounding. Seeking to determine the cause of the grounding, Windward, a leader data analysis firm reviewed positioning data for an analysis published in Forbes. They are reporting that the ship was traveling at a normal 11-knot speed but was far to the north of the normal shipping lanes from the time it reached the area around Mauritius two days before the grounding.

Shortly after the grounding, there had also been reports from the media in Mauritius that the Coast Guard spotted the vessel’s course and tried in vain in the hours before the grounding to contact the Wakashio. 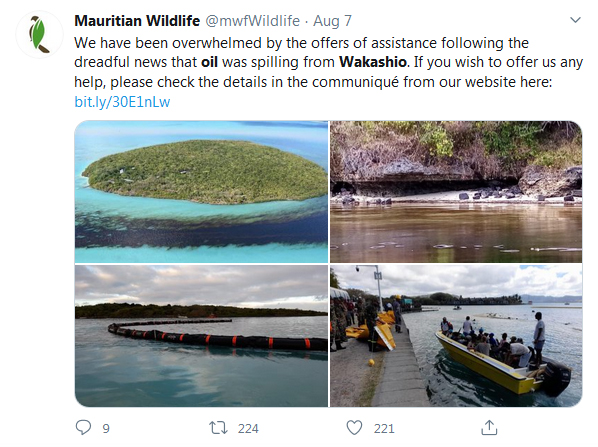