Efforts are continuing to explore the use of automation, artificial intelligence, and image recognition to improve the navigation and safety of ship operations. Earlier this year, Japan’s Mitsui O.S.K. Lines demonstrated its efforts are using augmented reality (AR) technology to enhance navigational awareness and now NYK announced that it has begun a trial on the system that can monitor the horizon to recognize dangerous objects that might be within a ship’s range.

NYK working with its strategic research and development subsidiary MTI Co. installed the Automatic Ship Target recognition System developed in Israel by Orca AI on one of NYK’s vessels. The goal is to verify the detection capability and the contribution the system can make to the role of the lookout on a ship’s bridge. Working with Orca, NYK also plans to improve the target detection algorithm through the use of data collection and machine learning on the Israeli company’s servers. During the trial, they are also looking to enhance the recognition rate so that the system could be used to enhance efforts to develop autonomous shipping.

While research has been ongoing on automatic identification by image analysis, according to NYK earlier systems were limited by the ability of cameras to receiving images both at day and night especially with ships exposed the natural elements including rain and wind. Also, they said that no system could measure the distance from the captured image to the target with a certain degree of accuracy.

The new system NYK explained uses a camera unit that can shoot day and night to automatically recognize ships and targets and measure the distance to them. Information obtained from navigational equipment, including vessel names, distance, and time when the ship is closest to the target, can be superimposed and displayed in an integrated manner to a tablet or touch-panel monitor display. 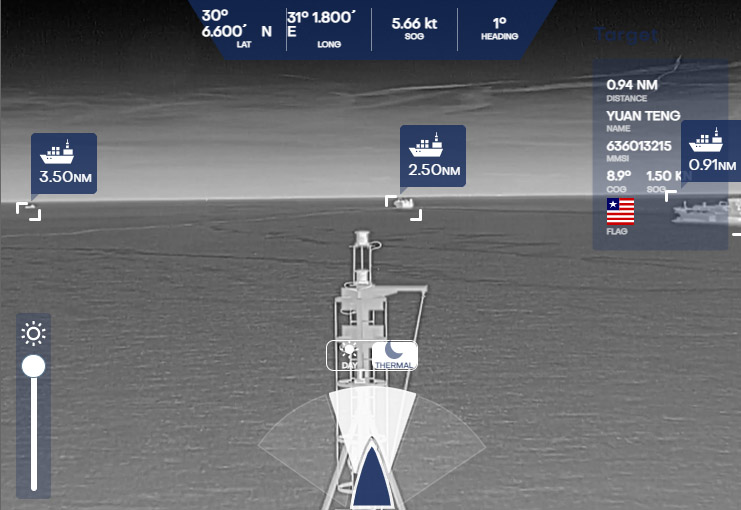 The system is designed to automatically recognizing dangerous objects and other vessels that may be overlooked by the human eye, especially at night and in congested waters. NYK is seeking to verify this capability noting that the system could be revolutionary in its capabilities to independently recognize small fishing boats and small markers that are not captured by radar and not equipped with AIS. The system measures the distance to these targets and notifies the person on duty of collision danger.

The test vessel is equipped with three cameras and three infrared cameras to make nighttime imaging possible. The system has an angle of view of 120 degrees. With the video images and data also being relayed to Orca AI’s servers, NYK notes it is possible to monitor the movement of the ship from shore.

In addition, in joint research conducted by NYK and MTI with Orca AI, the system was also installed on domestic vessels to collect information on the Japanese coast, as well as fishing boats, fishing gear, and buoys peculiar to Japan. This will be used in support of NYK’s efforts with autonomous shipping.