The NTSB has released a report on a dangerous engine failure aboard the ferry Wenatchee after an overhaul in 2021. When an undertorqued bolt rattled loose, the engine threw a conn rod and half of a piston through an inspection cover, starting a fire and causing millions of dollars of damage.

In November 2020, the Wenatchee entered a drydock period, which included overhauls for two of its main engines, the common and reliable EMD 710 series. Two experienced factory technicians carried out the overhauls, including renewal of pistons, connecting rods, liners and bearings. The work was completed without any unusual reports.

During dockside testing of the main engines, lube pressure alarms sounded for the number three engine, and the crew shut it down. On inspection, crewmembers found pieces of plastic in the engine's lube oil system, which turned out to be pieces of a cigarette lighter. After spending two days hunting down and removing the majority of the parts of the lighter, the technicians advised Washington State Ferries that it was safe to run the engine.

On April 22, 2021, as the drydock period came to a close, the Wenatchee headed out for sea trials. This includeda sequence of runs at specific engine loads in order to test and break in the engines. At 1331, as the vessel was running at 100 percent power, an oiler spotted white smoke and saw “red glowing items" that were "just popping out" of an engine.

The crew responded quickly, and within about three minutes, they had closed all watertight doors, stopped ventilation fans, closed off vent dampers and shut off the fuel valves to affected engine room. The vessel's other engine room remained operating, providing continuity of propulsion and power.

The smoke began to clear and the engine room boundaries remained cool to the touch, so the crew determined it was not necessary to use firehoses or discharge the CO2 firefighting system. After the Wenatchee reached a safe berth, engineers entered the space again and found broken components scattered next to the number three engine, including a conn rod and part of a piston. 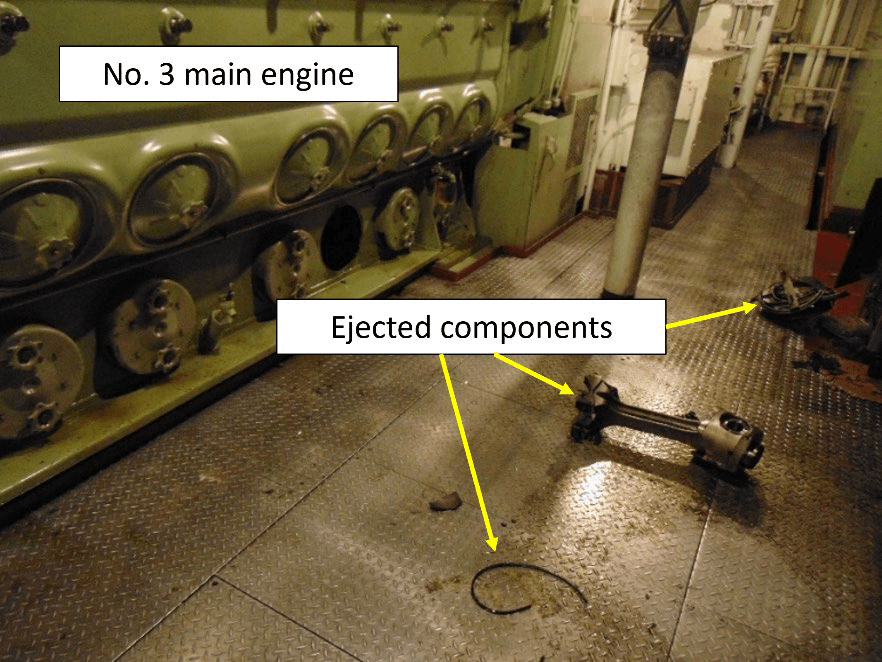 On inspection, engineers found that the pair of rods and pistons attached to the number 6 crank pin (for cylinders 6 and 14) were in a "state of complete destruction." One intact bolt from the crank assembly's basket was found in the oil pan, and its fastening nut was found separately, indicating that it had backed off during operation. All other bolts in the set were deformed and broken from tensile overload.

A forensic analysis determined that the first bolt rattled loose because it was undertorqued during the overhaul. This caused the piston pair to lose alignment with the crankshaft, resulting in loss of lubrication, overheating and bearing failure. Subjected to extreme forces, the number 14 connecting rod broke loose and was ejected through an inspection cover, spraying crankcase gases out and sparking the fire. 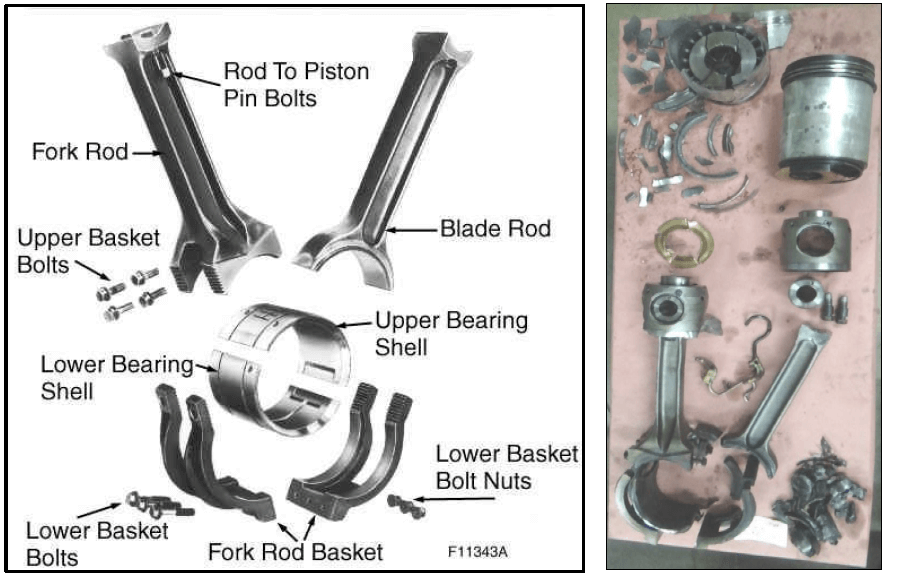 Both the number three engine and the adjacent number four engine had to be fully overhauled again, and additional damage to other engine room components had to be repaired. The total cost came to about $3.8 million.

"The NTSB has investigated several recent casualties that likely were caused by a failure to tighten fasteners on marine engines to the manufacturer’s recommended torque settings," NTSB noted.  "Undertorqueing a fastener may cause excess vibration or allow the fastener to come loose."