In a report released Tuesday, the National Transportation Safety Board (NTSB) highlighted a recurring maintenance issue that can cause loss of propulsion during maneuvering on single-screw merchant ships. With a standard low-speed diesel, precise maneuvers require stopping and restarting the engine. If the pneumatic starter system fails, the ship is adrift, often in the close confines of a harbor or fairway.

This breakdown occurred aboard the tanker Riverside on March 15, 2021, as she was exiting the port of Corpus Christi, Texas. At about 1302 hours, Riverside lost propulsion and struck the pier at the Moda Ingleside Energy Center, resulting in dock damage of about $7 million.

At 1018 hours, two pilots boarded Riverside and the vessel got under way from Corpus Christi's inner harbor. She was fully laden, with 700,000 barrels of crude aboard. After passing the Harbor Bridge, her escort tugs departed and the pilot increased speed to 10.5 knots.

The tanker Nordic Aquarius was getting ready to leave the pier at the Moda Center, a few miles ahead. Riverside's pilot agreed to slow in order to allow Nordic Aquarius to depart first, and he issued progressively lower engine speeds, culminating in all stop at 1255. The Riverside's heading began to drift to port within about one minute, and a helm order had no effect.

At 1258, the pilot ordered dead slow ahead to move some water over the rudder and get steerage back. However, the engine refused to start, either from the bridge control panel or from the engine room control panel. The Riverside was drifting towards the Moda pier, making about six knots.

Acting on a request from the pilot, and with less than four minutes to work, the nearby tug Honor managed to move in and give a push on Riverside's port bow. The attempt directed Riverside away from the middle of the pier, but the vessel was still headed for the end of the dock at five knots. Honor got out of the way before impact, and Riverside plowed through the concrete and kept going. Honor moved to the stern and got a line up fast enough to help bring Riverside to a stop within another 1600 feet, with the help of three other nearby tugs. 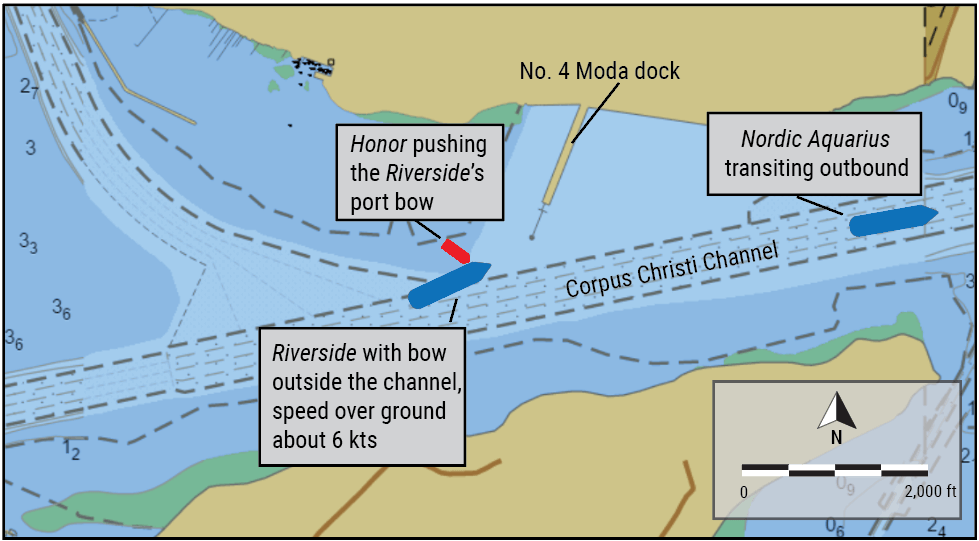 The loss of power was not the first time that the Riverside had had engine troubles on the voyage. Three days earlier, as she was getting ready to enter Corpus Christi, Riverside had trouble starting and reversing her main engine. After leak testing the air control valves on the pneumatic start system and replacing two of them, the chief engineer found that the problem continued, so he decided to turn on the limit cancel mode on the engine's fuel injection. This allowed about 10 percent more fuel at startup, and it appeared to fix the problem.

After the casualty, the Coast Guard ordered the engine inspected and repaired before the vessel could sail again. Two OEM factory technicians came and opened up the starting air distributor, and they found that the actuator valve for the number six cylinder was filled with "hardened grease and dirt," which prevented it from moving properly. One of the technicians told investigators that the buildup may have been caused by excess moisture in the system, potentially caused by insufficient attention to the maintenance routine of draining the start air tanks and piping.

The chief engineer's "fix" - turning on the injection limit cancel mode - actually had nothing to do with whether the engine would start or stop, the technician said. The pattern of functionality was random: if the engine's crankshaft position before startup required the use of air in the number-six cylinder, it was less likely to start, because the actuator valve for that cylinder was jammed. If the engine was sitting at a different crankshaft position and didn't need air in that cylinder, it started more easily.

"The NTSB has investigated multiple casualties involving slow-speed engine pneumatic starting and control systems and, in particular, air actuating valves within the systems. Vessel operators should ensure their crews are equipped with the resources and training to execute timely and thorough maintenance and repair on engines," the agency advised.